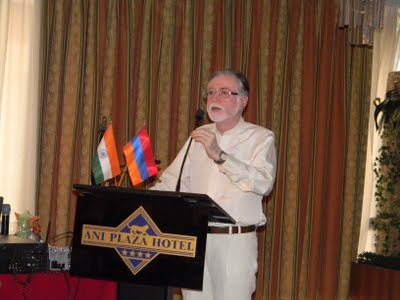 The program of the event consisted of two parts: first part included documentary film show about ?Terrorism in contemporary world?,  presented by the Embassy and second part was the presentation of the Armenian Indian Friendship group?s creation history and future visions, presented by the founder of the group- Mr. Rananjay Anand.

During the first part of the meeting Ambassador of India in Armenia H.E. Mr. Achal Kumar Malhotra spoke about the harmful and dangerous causes of the terrorism in contemporary world, and the efforts which should be made to prevent the expansion and development as well as its harmful impact on our generation. Mr. Ambassador also congratulated IAF members on the building of the cultural bridge between Armenia and India and the solidarity of two countries that it can develop in the future.


During the second part of the Evening Mr Rananjay Anand, the founder of IAF, introduced to the audience the “Society for Promotion of Global Understanding” (SPGU) and its ARMENIA CHAPTER “Indo-Armenian Friendship NGO”. He spoke about the missions and visions of the future NGO.

The participant?s attention was invited to 2 special editions of Namaste India magazine released by Embassy of India. 1st one is a collection of love stories from India translated into Armenian. 2nd one is a collection of poems for little children written by Prof. Anita Verma and translated into Armenian by Hripsime Nersisyan and illustrated by Andranik Asatryan?s paintings.

The cultural programs of the evening presented dance show of India and Armenian national dances, each dance pictured the beauty of Armenian and Indian women?s world.

First performance was an Indian dance performed by an performed by an Armenian professional dancer Gayane. The dance is called ?Nimbudah? which means a small lemon. It?s one of traditional songs of Rajastan State,  well known from a movie  “HUM DIL DE CHUKE SANAM” The film heroine sings to  her loved one about lemon and asks him to  bring the lemon so that the lemon would save them both from evil and jealous people.

Next performance was an Armenian national folk dance performed by an Armenian beauty Mariam Azizyan. The dance is called ?Bardavari? or ?Vardavari?. It was performed by Armenian women since ancient times all over historical Armenia showing the grace and the gentleness of the Armenian woman.

And finally the audience had an opportunity to get in touch with Indian miracle ? the music of Tabla, by Armenian Tabla Player Karen. An armenian who spent most part of his life – almost 30 years practicing hatha yoga. Moreover he plays an Indian national instrument Tabla for more than 25 years. His passion led him to Moscow where he started learning Tabla playing from 7 Gurus at the embassy of India in Moscow.

At the end of the meeting one of the participants, famous Armenian-Indian singer Radhe Shyam (original name Dustrik Babayan) expressed her grattitude for the meeting and her will to present a song to IAF co-founders. She performed a Hindi song called “Chura Liya Hai Tumne Jo Dil Ko.”

Posted in Azad-Hye with permission by IAF