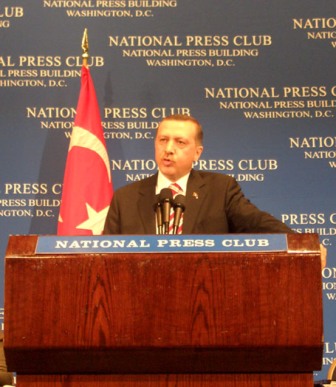 by Mrinalini Reddy
?
WASHINGTON — Turkey?s Prime Minister Tayyip Erdogan was in Washington Monday to meet with President Bush to discuss mounting tensions between the Turks and Kurdish rebel factions in Northern Iraq.
?
Also on the agenda was the Armenian genocide resolution which passed in the House Foreign Affairs Committee last month. The Medill News Service spoke with two experts who have challenged Turkey?s position on the Armenian question and asked them to respond to Erdogan?s comments.
?
Turkish scholar Taner Ak?am, author of ?A Shameful Act : The Armenian Genocide and the Question of Turkish Responsibility,? is one of the first Turkish academics to acknowledge and discuss openly the killings of? Armenians by the Ottoman Turkish government in 1915.
?
Edward Alexander is a retired U.S. Foreign Service officer and author, born in New York to Armenian parents who fled Turkey.?

Erdogan: “Our documents indicate that there is no genocide that has taken place.? Those who claim it must prove it.? Having simple lobbying activities and trying to achieve a result in this way is unacceptable to Turkey. ”
?
Alexander: “The evidence is overwhelming and to many Armenians, it is utterly preposterous for anyone, especially the Turkish government, to deny what is historical truth.? For my research, one of my sources was the German press. My other source was the cables that were sent to Ambassador Henry Morgenthau, the U.S. ambassador in Turkey at the time of the genocide. These are documents that cannot be refuted.? In addition, I did research eye-witness reports in Merseburg, Germany.”
?
Ak?am: “Our Prime Minister is wrong because we can prove the genocidal intent without any problems. One set of documentation are the trials in Istanbul between 1919 and 1921.? These are the indictments, verdicts, hand-written testimonies and eye-witness accounts which were recorded during that time. There is a lot of evidence here showing the killing of the Armenians.? The originals of these documents are not known.? We assume that they have been destroyed after Turkish nationalists took over Istanbul. [Turkish officials] only trust the documents in prime ministerial archive today in Istanbul. I can show very easily, based on prime ministerial archives, the genocidal intent of Ottoman Turkey.? I will publish a book in the Turkish language in 2008 where I am presenting more than 500 documents from prime ministerial archives in Istanbul.”
?
Erdogan: “What took place was called deportation because that was a very difficult time….Given the context of the time and the events that took place, there was provocation by some other countries and the Armenians became part of the rebellion in those years.”
?
Alexander: “One of the newer arguments that they are raising now is that it was the Armenians who attacked the Turks.? This is ridiculous.? How the Armenians would have done this, having been disarmed, calls for a great stretch of the imagination.”
?
Ak?am:? “The argument says there were Armenian uprisings. It is simply a lie. The deportations were taking place before any Armenian uprising.? There was only one incident in April 1915 and the deportation decree occurred at the end of March. They were individual Armenian deserters and even Armenians were against them.? Not only were Armenians deported from eastern Anatolia, they were deported from the entire Anatolia, despite being totally integrated into the Turkish life.”
?
Erdogan: “I wrote a letter to President Kocharian [Republic of Armenia] in 2005.? We have suggested the establishment of a joint historical commission and we said that we would make available all documents in our archives?. We aim to reach a common understanding of this painful period in our history, but I still, to date, have not received a response to my letter in 2005.”
?
Alexander: “The position of the Armenian government has always been that they want to have diplomatic relations with Turkey, with no pre-existing conditions. However, the Turkish government did not accept this and laid down its own conditions: 1) the Armenian Diaspora should stop talking about the genocide 2) Armenia and the Azerbijani government should declare peace.”
?
Ak?am: “It is a good suggestion.? If there is a problem you cannot solve, you have to find ways to talk to each other.? First, you need diplomatic relations.? How can you establish a commission without even talking? Turkey has pre-conditions for diplomatic relations, which Armenia does not want.”
?
Erdogan: “It is my sincere wish that the US Congress does not keep this resolution and does away with the discussion of this resolution altogether.”
?
Alexander: “This doesn?t surprise me.? There is a very strong feeling in the Congress that this may not be the best time to bring up the resolution because of the Iraq/Kurdish situation.? The main thing is that it should not be shelved. You have scholars at the International Association of Genocide Scholars come up with the same conclusion. It is simply a move on the part of Turkey to delay the resolution in the hope that eventually those who are true survivors will have died and their offspring, like myself, will be so elderly. I am 87. Turks are hoping that time will weaken the arguments and memory.”
?
Ak?am:? “The U.S. resolution does and does not matter.? It doesn?t matter because it will be a psychological victory, but won?t really solve anything.? It does matter because Turkey must understand that threatening with its political strategic power will not solve its list of problems.? For instance, Turkey cannot become a member of the European Union if talking about history is a crime.”
?
Erdogan: “This is a problem of the Armenian Diaspora.? They are looking for a way to create some sort of benefit for itself and this is what they have found.? If this works, then they look to achieve some gains from it.? If not, the world will have lost a lot of time.”
?
Alexander: “I don?t know what the gains would be. We are asking only for justice.”
?
Ak?am: “It is a stupid distinction to think that there is a difference between Armenians and Armenians in the Diaspora.? They are all asking that the perpetrator must face their history.”