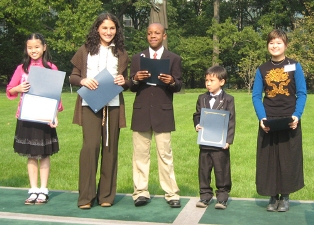 Winners of the International Children's Art Competition to design a United Nations stamp on the theme “We can end poverty” were honoured on 5 November 2007 as part of the UNHQ events marking the 20th anniversary of the International Day for the Eradication of Poverty.
?
In attendence were young artists Mariam Marukian (Armenia), Grace Tsang (China), Rufaro Duri (Zimbabwe) and Elisabeth Chun Ning Au (China), who designed five of the six winning entries.
?
Robert Gray, Chief of the UN Postal Administration (UNPA) and one of the competition judges, met with the children and said that selecting the winners was “certainly a challenge” and that all the submissions “truly demonstrate the artistic talents of our youth and their motivation to end poverty.”?
?
Besides being evaluated for their creativity, winners were chosen for their potential to be printed in a miniature format, meeting the high quality reproduction required for postage stamps.
?
More than 12,000 children from 124 countries took part in the art competition. The highest number of entries came from Norway (1063), followed by the United States of America (675), Portugal (543), Poland (528), Armenia (475), India (469) and Indonesia (447). All winners were interviewed by the United Nations radio.
?
Mariam Marukian, the winner from Armenia (second from left in the above photo), is a 13 year-old girl. “To my mind, work will help people live fairly. That is why in my picture I depict people working in the garden. They have worked hard and their harvest is rich”, she said. Ten of Armenian children's pictures were included among best 100 works. 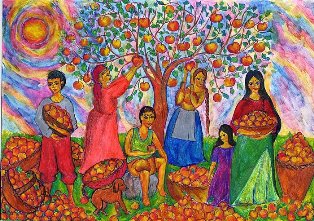 ADDITIONAL READING:
?
Excerpts from the Statement by Mr. Sha Zukang, Under-Secretary General for Economic and Social Affairs on the International Day for the Eradication of Poverty, New York, 17 October 2007 Delivered by Rachel Mayanja, Assistant Secretary-General and Special Adviser on Gender Issues and the Advancement of Women:
?
Without freedom from hunger and deprivation, human rights are threatened and societies are destabilized. We have a collective responsibility to mobilize all means to ensure that all human beings live a life free from want. This will not be easy, but we can do it.
?
This was the focus of the International Children?s Art Competition to celebrate this 20th anniversary of the International Day for Poverty Eradication. My department, the Department of Economic and Social Affairs, organized the competition in cooperation with the Department of Public Information and the United Nations Postal Administration. The challenge we put out to children everywhere was to design a UN postage stamp on the theme ?We can end poverty?.
?
The response from children around the world was tremendous. Over 12,000 children from 124 countries participated. My staff tells me that reviewing all the artwork was a mammoth effort, yet a wonderful one ? and a privilege.
?
Through their artwork, the children show us, in a pure and powerful way, the pressing need for greater solidarity and cooperation among all peoples and countries in the fight against poverty. Many of the children focused in on education and employment as ways to empower the poor. Many also pointed up the role of the UN in helping to lead the way to a world where poverty has been defeated.
?
I thank all the children. You are our citizens, workers, parents, and leaders of the future. I hope that you will continue to work, together, to end poverty, through art and other ways. You already have inspired others to join in the pursuit of this great goal.
?
Our panel of judges selected 50 best designs. I encourage everyone here to go see the exhibit in the Visitor?s lobby later today ? you will not be disappointed by the wonderful talent and imagination of children from all over the world. We have also created a website where you can see a large selection of the thousands of entries received.
? 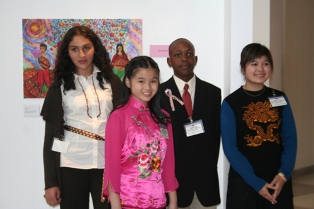 Six designs have been selected as the winners of the competition, and will be issued next year as UN stamps. The winners are: Elisabeth Elaine Chun Ning Au (China, Hong Kong), Ranajoy Benerjee (India), Rufaro Duri (Zimbabwe), Bryan Jevoncia (Indonesia), Mariam Marukian (Armenia) and Grace Tsang Ji Yan (China, Hong Kong).
?
Elisabeth, Rufaro, Bryan, Mariam, and Grace are actually here with us today. I have the pleasure to present each of you with an award certificate. Please, everyone, join me in congratulating our winners.
?
Let all of us seize the opportunity today to renew our commitment and determination to eradicate poverty everywhere. And let us also stand in solidarity with poor people everywhere who fight poverty every day.
?
Source: United Nations website
http://www.un.org/esa/socdev/social/art/exhibit.html
?
Photos: The Exhibit ceremony for the winners of the International Art Competition, UN headquarters, New York.?Mariam Marukian is the second from left in the first photo and the first on left in the second photo.