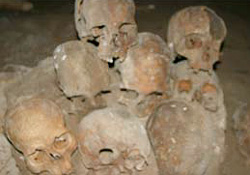 Turkish gendarmerie has instructed local villagers of a southeastern region to keep silence about a recently discovered mass burial site that might contain skeletons of massacred Armenians.

The mass burial, believed to be from the Armenian Genocide, was discovered in southeastern 's Mardin region on October 17, 2006.

According to ?lkede ?zg?r G?ndem , a Kurdish newspaper published in Turkish, villagers from Xirabebaba (Kuru) were digging a grave for one of their relatives when they came across to a cave full of skulls and bones of reportedly 40 people.

The Xirabebaba residents assumed they had uncovered a mass grave of 300 Armenian villagers massacred during the Genocide of 1915. They informed Akarsu Gendarmerie headquarters, the local military unit, about the discovered cave. Turkish army officers, according to ?lkede ?zg?r G?ndem, instructed the villagers to blockade the cave entrance and make no mention about the skeletons. The officers said an investigation would take place.

?lkede ?zg?r G?ndem reported on the developments and the Turkish military's attempt to hide the news. In an October 22, 2006 article, titled ?Found by villagers; covered up by the military,? the newspaper wrote that soldiers from Akarsu gendarmerie headquarters came to the site, covered the cave entrance and took photographs. Journalists, who had arrived to obtain more information, were denied access to the cave.

Although there had been prior instances of finding mass burial sites believed to be from the Armenian Genocide, this was the first incident when such a discovery was reported by a daily newspaper in .

As the mass burial made news, local gendarmerie made another visit to the villagers. The latter were pressed to report the name of the person who leaked the mass burial discovery to the press. The officers told the villagers that the news reported by Roj TV, an international Kurdish satellite television, and ?lkede ?zg?r G?ndem were ?all lies.? The villagers were warned not to show the way to the cave to anybody.

The victims of the mass grave, according to S?dert?rn University History Professor David Gaunt, are most likely the 150 Armenian and 120 Syriac males, heads of their families, from the nearby town of (now Oguz) killed on June 14, 1915.

The Armenian and Syriac residents were marched out of the town, and only one person was known to have escaped to tell of what had happened, Prof. Gaunt says. According to the Syriac survivor, his marching neighbors were murdered and their bodies were placed in a well. ?The mass burial in this cave suggests that the two groups could have been killed in separate places, and that the Armenians were put into this cave, while the Syriacs were put in a well,? Prof. Gaunt, whose ?Massacres, Resistance, Protectors: Muslim-Christian Relations in Eastern Anatolia during World War I? book comes out November, 2006, concludes.

The Turkish government officially denies the genocide of over a million Armenians, accompanied with massacres of thousands of Syriacs and other minorities, which took place in what is now eastern during WWI.

A draft of this report has been initially published at:?www.blogian.hayastan.com