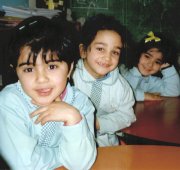 , ? The United Armenian Fund, through a generous grant from The Lincy Foundation, is donating a total of $4.5 million to all 28 Armenian schools throughout .

This contribution is prompted by the economic crisis of the past few years, which was aggravated by the devastating attack on last Summer. Thousands of needy Armenian families could no longer afford the tuition for the Armenian schools their children attended. Consequently, most of these schools were in no position to pay the salaries of their teachers and staff.

The UAF funds contributed to these schools are designated for three specific purposes:

Harut Sassounian, the President of the United Armenian Fund, is currently in to visit all 28 Armenian schools, meet with their principals and educational councils, and deliver the earmarked sums to each school.

“The UAF?s contribution will be allocated to all Armenian schools in , without exception,” Sassounian said.

The schools receiving financial assistance are:

“This unprecedented gift of $4.5 million should alleviate a large part of the heavy financial burden of the schools shouldered by the struggling Armenian community of . Armenians worldwide should lend a helping hand to this most vital community which has many other needs. Few things are as important for the future of the Armenian people as the education of the next generation. By supporting Armenian schools, we are investing not just in the survival, but the revival of Armenian culture,” Sassounian said.

Since its inception in 1989, the UAF has sent $447 million of humanitarian assistance to on board 140 airlifts and 1,359 sea containers.