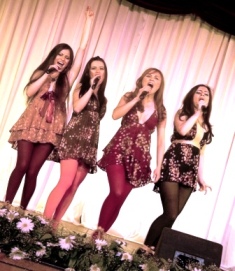 By Carlos Jose Bourdjian
?
Specially for Azad-Hye
?
Armenian contemporary music has recently entered a recovery period. After the independence in 1991 and during the following difficult years, people lived in poverty and misery. There was lack of gas and electricity almost everywhere. Everybody was complaining about everything; no one seemed to be satisfied with the shaping changes. No one had the time to be involved in the music industry.
?
In the late 90s however things started to change gradually. The public's musical taste was refined with the rise of new names who are still occupying their places in the world of music today. In the beginning of this millennium and with the widespread technological applications in musical production, everyone with a musical talent in Armenia nurtured the same dream: to sing and to be a big star.
?
Today, people are somehow confused and not certain about what kind of music they should listen. During concerts you can not tell who is singing live and who is singing with minus (or sometimes plus) playback. Unfortunately, sound quality is the last thing that bothers the artists and the audience; the focus is exclusively on the APPEARANCE.
?
Of course there are some exceptions and one of them is the group “HAYER” (Armenians).
?
“Hayer” came to Syria with the invitation of Grtasiradz Cultural Association. Concerts were organized in coordination with the Consulate of the Republic of Armenia in Aleppo and in collaboration with the Syrian Ministry of Culture. During the last week of May 2007 the group had two concerts in Aleppo and one in Damascus. They also participated in the gala dinner organized by Grtasiradz.
?
The repertoire of the concerts included different genres of music such as pop, soul, traditional, retro and contemporary. There were debut songs and others known in the past but presented here in new arrangements. One of the remarkable performances was the improvised version of Aram Khatchadurian?s “Suseramard” (Saber dance) mixing together both classical and hip hop versions. Besides singing and dancing, the members showed their solo singing capabilities, each in her own way. The group performed in Armenian, English, Italian and even in Arabic. It is worth mentioning that the whole show was done live without any lip-singing.
?
On the last day of the tour and before going back to Yerevan, I met the four members of HAYER (Emmy Bejanian, Nelly Boghossian, Arshaluys Sarkissian and Jacqueline Tumanian) and their managing director Nadiejhda Sarkissian and had the following cozy chat:
?
As far as I know the Hayer group has a long history behind it, and several stars known in today's Armenian entertainment scene were previously members in this group. When exactly Hayer was formed?
The group was formed in 1987 by me [Nadiejhda Sarkissian] and my husband David Bejanyan. At that time the group had its own musicians. People like David Azarian, Grisha Balakian, Garo and Vahagn Hayrabedian and others were members in Hayer. As singers there were Anahid Sahagian, Michael Boghossian and Ashod Satian. I remember we first visited Syria with these members in 1988 and again after several years in 1992 but with new members. On vocal we had Arminka (Armine Nahabedian), Goga (Gohar Gevorgian), Lilit and me. And as musicians there were Arman Jalalian, Murzik (Ara Torosian) and others. I?m sorry I can?t remember all the names.
?
Arminka and Goga started at the age of 17-18 and stayed for six years, but the project had to go on and I had to find new members, that?s why I began working in a new project called Do-Re-Mi music contest which provided six years of music education to children and it was a very good source for recruiting new members for Hayer. The most important thing for me was having people with strong basis and music knowledge and Do-Re-Mi school provided all these elements together with vocal and special acting lessons.
? 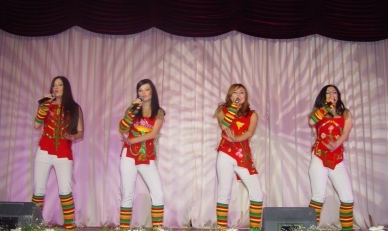 In 1998 we formed the group “Poqrig Hayer” (Little Armenians) keeping it parallel with the Hayer group. Later Poqrig Hayer was incorporated in Hayer with the present day members: Emmy Bejanian (my daughter), Nelly Boghossian, Arshaluys Sarkissian and Jacqueline Tumanian.
?
Hayer, together with other groups from Do-Re-Mi school, participated in different international festivals in countries like Germany, Italy, Estonia, Latvia and Bulgaria, winning always prime prizes. You can imagine we used to enter contests with 4 members and returned back with 5 prizes (or entering the contest with 3 and returning back with 4 medals), due to the fact that the last prize was given to the group itself. I know this was a massive work, but I?m proud of doing it especially as it was rewarded with all these prizes. Hayer to this date won 42 prizes.
?
The present team of Hayer has been working together for seven years. Emmy has her own solo career apart from the group. Are you afraid that any of the other members would decide to go solo as well?
I?m not afraid of such things. The girls live together as sisters in one family and it gives me joy seeing Hayer performing together as a group and as solo singers too. Each member has its own style, image and vocal abilities, that?s why Jacqueline is focusing lately on Rock, Arshaluys on Soul, Nelly on Pop, and Emmy has already her own style. I can say that Hayer is strong with all its members together or taken each one of them separately. And what I want to emphasize is that all performances are always live without any playback singing. It is worldwide acceptable to sing on minus music tracks but not on complete playbacks which is very common on the Armenian star scene nowadays. I wish I had the ability to have a band that accompanies the girls everywhere they go like in the old times.
?
Two years ago a German company adopted Hayer and sponsored the recording of an album with a slight change in the group name to “Hayah”. Tell us a bit about this project.
The group went to Germany to participate in an international contest where it won the grand prize. Later on the trip they got a proposal from a company called “Yontown Media” to record an album there. It was a big opportunity for the group to spend 3 months in Berlin training and recording songs in 3 major studios. The company wanted to change the name of the group to HAYAH just to make it easy for Europeans to spell it. If you read it from left to right till Y you will get Hay (Armenian) and vice versa. Besides, the middle Y refers to Yon town Media Company, and we accepted this proposal under one condition which was keeping the Armenian origins of the group. The girls decided that Armenia should remain their homeland and they won?t leave Yerevan. The Germans were amazed about the Armenian history, music and especially in our traditional musical instruments like duduk, dhol and zurna. They decided to include four Armenian songs in the album. The first EP single was released with 3 songs; “Prove yourself” by Michael Jackson, this song was once performed by Justin Timberlake and Britney Spears during “The Star Search” show many years ago, but never recorded or made a hit like it happened with “Hayah”. The second song was “Someday” by Hayer, which is the English version of “Heqiat” (inchu inchbes ays badahets), and the last one was “Hold on” by The Blue Brothers. Now we are waiting for the release of the album which will be in October this year. It will include the English version of the song “Yerk” by Hayko, originally performed in 1997, but this time with the voice of Arshaluys Sarkissian.
?
I?m proud that the group reached this success without any help or recommendation from any other side. The Germans chose them for their good performance, strong voices and acting abilities. They even didn?t know for a long time that Emmy was my daughter.
?
Armenians in Armenia and Diaspora are familiar with the group?s songs through TV shows, video clips or CD purchases that include their songs like Konstantin Orpelian?s Songbook and the recording of Gala concert of “Seruntneri Yerte”, a special concert dedicated to Yerevanian 70?s songs. Why didn?t Hayer have their own album especially that they had won the title Best Pop Group for 3 times including this year?
After signing with the Germans, the group didn?t have the right to release any other album or even a single song till the actual release of the European album. Now we are planning to release another album that includes all the big hits like “Manir manir”, “Galis es” and others, because with these songs they became popular and they are all time classics that people love to hear with a new presentation. Although they didn?t have an album, but people used to go to their concerts, while, on the contrary, many other artists who had albums during their career were not able to organize even a single concert.
?


?
Tell us a bit about the songs that the group performed for the first time in Syria.
Lately there had been many songs written especially for Hayer by famous songwriters. One of them is “Kovk Zaroyi”, lyrics by Avedik Isahakian and music by Leyla Saribekian, the other one is “You need a girl”, music and lyrics by Brandon Stone. This song was performed first time in Yerevan during the song contest for Armenia's nomination in Eurovision 2007. And the last one is “Work it out”, a song dedicated to the Armenian Genocide written by Marcus Fritch, our friend back in Yontown Company in Germany. He was very much impressed about our history that he decided to write a song in English dedicated to the memory of Genocide victims. The last phrase in Armenian was written by Hayer.
?
What are the future plans for Hayer?
Beside the album presentation in both Germany and Armenia, there will be concerts in different parts of Armenia and abroad. The group is invited to go to Georgia and a big concert is waiting for them in Siberia which will be a new experience. Meanwhile, Jacqueline and Arshaluys have finished their high school and will attend University very soon.
?
We wish you all the best in your plans and have a safe trip back home.
In the name of Hayer and Nadiejhda Sarkissian we would like to thank for this nice conversation before our flight. We were impressed about all information you had about us and we are lucky to have you as a friend.
? 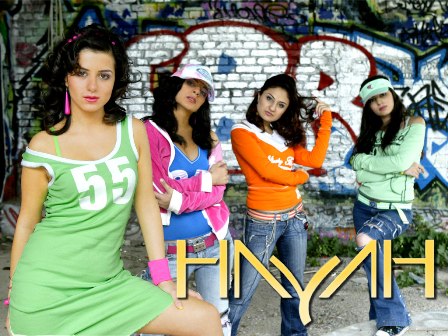