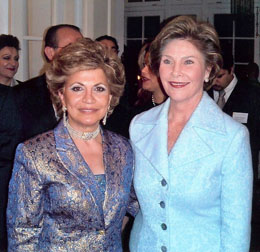 A historic milestone
The Armenian American Political Action Committee (ARMENPAC), is proud to announce that H.RES.106, known as the Armenian Genocide Resolution, has finally gained 218 cosponsors with the addition of Representatives John Yarmuth (D-KY) and Donna Christensen (D-VI). Along with Representative Adam Schiff (D-CA), the primary sponsor of H.RES.106, that resolution now has the support of 219 Members of Congress.
?
“On behalf of ARMENPAC, I would like to thank all cosponsors and all of the tireless advocates in our community who have worked hard by urging their Representatives to join in supporting H.RES.106. Two hundred eighteen is a significant number as it represents that a majority of the members of the House of Representatives have added their support to a piece of legislation. Historically, the Armenian Genocide Resolution has never before had a majority of House members supporting it,” said ARMENPAC Co-Chair Edgar Hagopian.
?
“This week's announcement is a significant milestone for the Armenian community in the United States and around the world. The next step in the progression of this resolution is to have it moved out of the Committee on Foreign Affairs and posted for a vote by the entire House of Representatives by Speaker Nancy Pelosi (D-CA),” added ARMENPAC Co-Chair Annie Totah.
?
“Although we are thrilled to announce the 218th cosponsor, ARMENPAC is asking our friends and supporters to continue to contact their legislators to urge a full vote on this resolution. We have made significant progress in our goal of ensuring that United States foreign policy reflects proper recognition of the Armenian Genocide, but now we have to work harder then ever to see it through to its passage,” said ARMENPAC Executive Director Jason Capizzi.
?
ARMENPAC supporters [in the United States of America] are urged to visit www.armenpac.org and to click on the “Take Action Now” link to find the contact information for their Representative in Congress. Supporters can also find tips on contacting their Representatives and sample language for letters and e-mails.
?
ARMENPAC supporters are urged to click here to find the contact information of their Representative in Congress.
Source: Press Release by ARMENPAC, Irving, Texas.??
Received on 11 July 2007
?
Photo: ARMENPAC Co-Chair Annie Totah with First Lady Laura Bush (from the Archives).

?
An independent, bipartisan political action committee with a nationwide membership, which is leading the current advocacy renaissance within the Armenian-American community. ARMENPAC raises awareness of, and advocates for, policies that help create peace, security and stability in the Caucasus region in part by fostering the active participation of the Armenian-American community in the United States political system. ARMENPAC primarily bolsters the efficacy of the Armenian Lobby in Washington, D.C. by providing financial support directly to, and/or endorsing the election campaigns of, candidates for United States Congress that champion Armenian-American issues. ARMENPAC has NO affiliation with respect to Armenian politics, and simply supports initiatives that benefit all Armenian-Americans.
?
Website of ARMENPAC: http://www.armenpac.org/