At the meeting of the local government, the issue of recognizing the Armenian language in parallel to the Georgian language as the second official language in Javakhq (Javakhk) province was discussed.
?
The initiative to recognize the Armenian language as the second official language in Javakhq will be presented to the central authorities in Tbilisi.
?
The initiative itself was brought forth by Sakrebulo (local parliament) deputy, Davit Rstakyan, an ethnic Armenian from Javakhk.
?
The Sakrebulo accepted this proposal and decided to set up a special commission comprised of Sakrebulo deputies and language experts of Armenian and Georgian descent who will be tasked with drafting the proposition before it is forwarded to the central authorities in Tbilisi.
?
“The proposition will be based upon various articles from the Georgian constitution, international treaties and obligations in regards to ethnic minorities which Georgia has already become a signatory of” said Mr. Rstakyan.
?
Source: Website of Javakhq Info (Informative-analytical Center), Akhalkalak, Javakhk, 28 June 2007
English pages: http://www.javakhq.info/eng.php?
?
Below is the homepage of Javakhq Info as seen on 13 July 2007
? 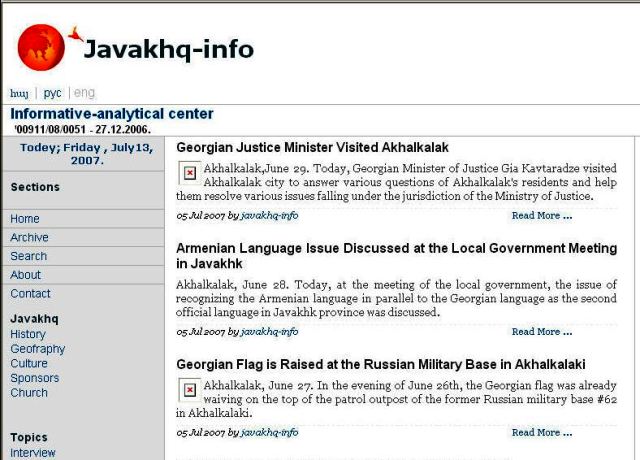