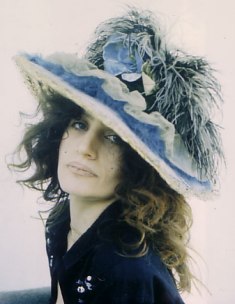 Elvina died of heart attack at the age of 59 in the United States.
?
“What a miracle!” exclaimed the great Aram Khachaturyan after listening to her perform. “How could I not have heard of her until now?” continued maestro while enthusiastically applauding. The young rising star, Elvina Makarian, was only 16 years old.
?
Elvina was born in the capital of Armenia, Yerevan.
?
She graduated with honors from the Music School of Chaykovski and later the Music Conservatory of Komitas. She studied to become a pianist but deep in her heart she always knew she belonged to the big stage. She was only 12 when she participated in a music festival at the Philharmonic Hall of Yerevan.
?
She won the first award at the festival; but most importantly she won the hearts of her audience who would later follow her art for the next four decades.
?
At the age of 14 she received an invitation to be the soloist of
Robert Amirkhanian's newly opened jazz band. Two years later she received another offer this time from Konstantin Orbelian to join his famous Yerevan State Entertainment Band.
?
In 1973 young Elvina was awarded with the Grand-Prize at the First World Music Awards in Moscow. Later that year she received her second Grand-Prize this time at the 10th World Music Awards in Berlin. The star of Elvina Makarian was heading one way, straight to the top.
?
Elvina's talent soon brought her recognition around the world, as she celebrated her success by launching a world tour to include France, Canada, Syria, Italy, Germany, England and other countries. After her performance at the “Anten 2” studio in France, French newspapers had one headline on their front pages, “Elvina, La Piaf de Soviet.” Russian newspaper “Izvestia” wrote, “When Elvina Makarian sings in Armenian, there is no translation needed. The talent and emotions of this unique and genius singer and composer is above any translation.”
?
During her last years Elvina resided in the United States where she released three CDs and numerous music videos. Elvina continued recording and composing songs for herself as well as for other artists. Recently, before her unexpected death, she opened her Music Studio where she trained new voices and discovered new young talents.
?
Source: Website of Elvina Makarian (with adjustment)

VIDEO CLIP dedicated to the loving memory of her son
“Menutyun” (Loneliness)
Performed by Elvina Makarian
Lyrics by Roman Avanesian
Arrangement by Karen Margaryan
Director: Arman Aghajanyan
Produced by Roman Pictures
?
Opening lines of the song:
“I am hearing the voice of my soul. What is the earthly life? … I am confused, what is for me the earthly life? … Happiness and hopes have gone like a cloud … “
?
URL link on YouTube: http://www.youtube.com/watch?v=6M1IWKcI_mA
?