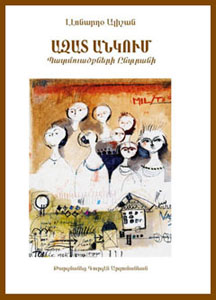 “Azat Angum” is the first translation into Armenian of Leonardo P. Alishan's collected short stories, published earlier under the title “Free Fall”. It contains 48 short stories and an introduction by the translator Gourgen Arzoumanian. The cover design belongs to Vachig Der Sarkesian.

The reader will see how fiction and truth are intermingled harmoniously. In the first story a legendary bird called “simorgh” gives the narrator magical seeds that bring forth the stories he writes. The last story finds the narrator receiving rejection letters from publishers simply because no one was interested in his strange Armenian ? Iranian – American poems.

In between the first and last stories, what comes of those seeds is the fruit of exile and identity crises.

“The Curse” portrays the image of an Iranian poet in exile, who loses his language and becomes isolated. On one occasion, when the poet tries to communicate with his wife, she responds, “What are these jeek jeek [chirping] noises you're making? Why don't you talk?” For some, the rejected poems are perhaps the same as the jeek jeek noises. However, the poet finds an audience who would understand him ? the community of the sparrows.

It is a fact that a new language and culture is flourishing in the Diaspora where duality and, in some cases, triplication is part of the daily life.

Being an Iranian-Armenian, Leonardo Alishan experienced both Diasporas, and this book is the reflection of that existence, which many people can relate to themselves.

The author: Leonardo P. Alishan (1951-2005) was born of Armenian parents in Tehran, Iran. He came to the United States for graduate studies in 1973. He taught Persian literature and comparative literature at the University of Utah in Salt Lake City from 1978-1997. During his life he published two collections of poetry, “Dancing Barefoot on Broken Glass” (1991) and “Through a Dewdrop” (2000). His poems and short stories have been published in a variety of anthologies and journals, and he was the recipient of a number of literary awards.

The Translator: Born in Salmas, Iran, Gourgen Arzoumanian is author of two Armenian books of poetry: “Apricot Shine” (1980) and “In the Intersections” (1984). Between 1995 and 2000, he was the editor of “Open Letter,” a Glendale-based Armenian Literary journal. He founded and organized the “Literary Corner”, a series of literary gatherings sponsored by Glendale Public Library. He is also editor of Birthmark, a bilingual anthology of Armenian- American Poetry published in 1999. Arzoumanian?s poetry, short stories, book critiques and translations have appeared in numerous Armenian literary magazines.

To order a copy of the book you can write to this email.

Published by Blind Owl Press an Imprint of Mazda Publishers