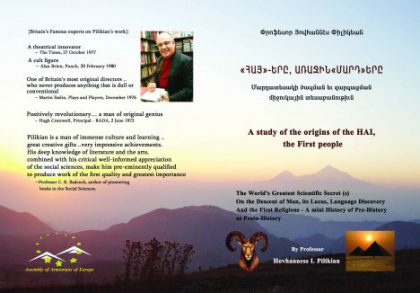 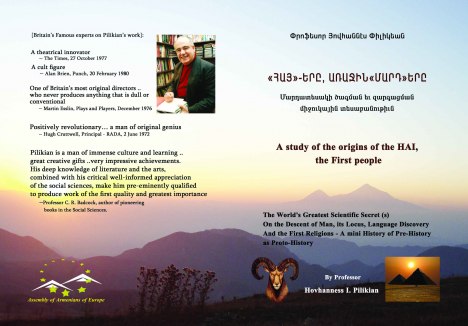 The Assembly of Armenians of Europe has published an extraordinary book by Professor Hovhanness I. Pilikian titled “A Study of the origins of the HAI, the First People“.

The book comes in two languages Armenian and English. The publisher is Garo Hakopian, President of the Assembly who has written also the introduction.

Hakopian says: “In spite of the complexity of its subject, the book is easily understood, immensely readable and exciting, with a smooth style of writing. It was first serialized in 1994  in Nor Serount, an American Armenian Monthly, published by the distinguished Editor, S. Nayiri.  It is now published as a book for the first time, with some additions by the author for this edition”.

By integrating systemic knowledge of archeology, lingusitics, anthropology and the social sciences, Pilikian presents “a quantum-nuclear theory of human origins and its evolution”.

The study is based on the discovery of an Armenian linguistic fossil, which dates back hundreds of thousands of years to the  time of the emergence of human language itself.

Professor Pilikian says: “What my linguisitic-fossils based theory confirms is the following; If the human-animal was found on different continents, as humanoid animal-groups, it is on the Armenian Highland Plateau that the Homo Erectus walked (turned bi-pedal), and created the first word that developed consciousness and self-identity”.

Edwina Charles, BA (Phil), BSc (Psych), explains the importance of the book: “Professor Pilikian defines for the first time in linguistic theory a remarkable new concept he calls a “Linguistic Fossil”. When an Armenian affirms in his own Armenian language ? Yess Hai em / I am Hai, what does it all mean truly? The Question takes Professor Pilikian onto a unique journey of scientific discovery throughout ancient history, beginning with pre history, and by using Quantum Mechanics CERN methodology ? bombarding the word HAI as an atomic nucleus (albeit a linguistic one!) with a stream of electrons (albeit semantic ones!) discovering new subatomic particles (albeit language Quarks/Photons!) that enlighten the very origins of mankind and language.”

Website of the Assembly of Armenians of Europe: http://www.aaeurop.com

Thanks to Ara Dembekjian for providing initial material for the article.

PROFESSOR PILIKIAN ABOUT HIS BOOK AND THEORY

This unique fossil found in the Armenian language preserves tens of thousands of years of historical evolutionary development of mankind.

Ai (pronounced as in the English first pronoun I) is what I call the archetypal quantum vowel phoneme ? the scream of life both in pain and pleasure, without the discovery of which the human language would simply be impossible, in other words, all human languages (Indo-European, Semitic et al.) constitute peripheral developments from the centre of the first archetypal ?circular? A-vowel.

When Ai is emphatically stressed as a Saussurian signal of individual and then tribal identity ? I am H-Ai meaning ?I am a member of the set of the Hai-tribe-people (= I am an Armenian, in modern Armenian)? it extends naturally into Ai-r, which in the Armenian language means man/male.

Precisely the same word and pronunciation in Armenian also delivers the meaning of Cave, where the homo sapiens first lived, enabling them to construct a settled life, hence the first socio-economic communities.

Air is also the root of the Armenian word Air-ếl, meaning fire-making, the very first technology man learnt (according to the classical Greek myth of Prometheus, stealing the Fire, from the gods, to give it to mankind as a divine gift) enabling the potential of all future technological advance.

I cannot emphasize enough that all this incredible complexity is miraculously preserved as a linguistic fossil, only and only in the Armenian language, still alive and active in modern Armenian as a semantic fossil displaying human evolutionary history from its very first moment of the linguistic Big Bang, when language, man?s greatest single evolutionary divine gift suddenly exploded, creating human all, precisely as all of the Universe was created by the singularity of the Big Bang.

Thus, in conclusion, the word HAI signifying the Armenian identity in the Armenian language preserves layers and layers of fossil records about the origins of mankind, from what I call the scream of life (Ai) to individual social and tribal communitarian identity (the people of HAI), to cave-dwelling, fire-making technology etc., and last but not least language-creation itself, the greatest and most exclusive gift of Darwinian natural selection and evolution.