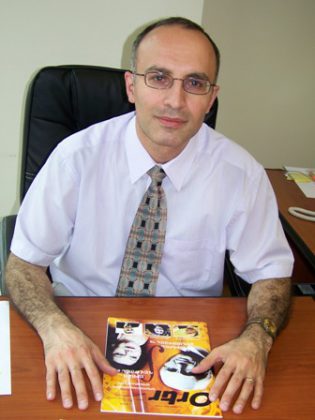 
Orer is the most famous and influential Armenian magazine in Europe. It is published in Prague since 1999 by the “Caucasus-Eastern Europe Media Centre” and edited by Hakob Asatryan.

The magazine covers Armenian news in the Czech Republic and in more than 30 Armenian communities in Europe. Special attention is given to Armenia-Europe relations, mutual political ties, joint economic projects, etc.

Czech political and public figures are invited to discuss different topics that interest the readers, including coverage related to Armenian refugees in Europe. A special part in the magazine is dedicated to Armenian individuals and companies based in the Czech Republic.

Prominent Armenian figures in politics, arts, public affairs, literature, sports and other domains have been interviewed in the past 12 years

The website www.orer.cz is gradually being updated with information. When it will be completely functional it will have Armenian, Czech and English sections. The hard copy is issued mainly in Armenian language with small supplement in Czech.

Around 60 issues (average 5 issues annually) have been published of this valuable magazine, all with the careful and meticulous work of its hard-working editor Hakob Asatryan, who is one of the leading Armenian journalists.

Orer is an interesting publication highly acclaimed for its richness of content, respect towards the mother tongue and care for topic selection. It has managed to stay alive despite the difficulties.

Asatryan is very optimistic about the future of Armenia. His enthusiasm has always inspired others.

Azad-Hye had the following interview with Hakob Asatryan:

How did the idea of publishing Orer start and how was the name chosen?

I came to Prague in 1997 and after a year and half I decided to publish Orer, because I noticed that there was no Armenian publication in Eastern Armenian language in a very wide geographical area (Europe). Many Armenians coming from Armenia were newly settled in Europe, but there was no publication or media that addressed their informational needs. There were some publication in Western Armenian such as “Haratch” of Paris (now discontinued), “Azat Or” and “Nor Ashkarh” of Athens and “Nor Serund” from England, but these were all in Western Armenian and their distribution was very limited. I thought such a periodical could help in keeping alive the language and serve as a bridge for sharing knowledge between many European Armenian communities.

The name Orer (which in Armenian means days) was chosen because I used to like and continue to like Arthur Mesjyan's “Orer” song. I consider it a great expression of what as Armenians we feel now


How did you manage to move from the idea to the publication phase?

Looking back into those days I feel I was very bold and courageous in taking that step. I had very positive initial expectations. I was thinking that nostalgia will encourage people to subscribe to an Armenian publication. In the following years I came to know that the reality is different from what I hoped. I know that the majority of Armenian publications face the same difficulties. I continued publishing Orer, sometimes depending on family resources and at other times through securing sponsors.

How are you able to distribute the publication?

Our biggest number of subscribers is in the Czech Republic and Germany. We are distributing freely to Armenian organizations, churches, cultural centres etc. Czech Airlines avails free copies of Orer to travellers on the Yerevan flight.

Unfortunately the postal expenses are getting so high that it is becoming difficult to continue the postal distribution. We have some sponsors such as Miko International, Arayik Company, Hotel General (Prague), Atlantis European Airways, but still this is not enough to cover the expenses. Recently we had cooperation with AGBU. I believe the government of Armenia should also support this publication, which is unique of its kind in the whole European region. We are not able to get official support from the Czech government because the Armenians are not recognized as official minority in the country.

Do you think that Orer is focusing more on positive aspects in our public life thus ignoring the negative sides?

We are not ignoring the critical issues that concern our nation. If needed we are adding also our own viewpoint. Whenever I attend meetings, seminars, conferences I write about the event and then try to cover the Armenian community in the same location, investigating about positive and negative sides. By publishing original articles, remarks, interviews, etc., in Orer the circle is getting bigger and many media workers are joining. I continue to work from my computer at home where I live with my journalist wife Anna Karapetyan and our three children.

Issue number 58 (2011) was a special issue dedicated to the Armenian Media and the freedom of speech after 20 years of independence. 30 personalities from the Armenian written and virtual media (including Azad-Hye editor) were interviewed and their ideas were hosted in this valuable issue. The result was an authoritative book covering media's current situation and future prospects. Hakob Asatryan's editorial note presented a resourceful summary on the current difficulties, challenges, failures and successes in the world of Armenian media.

Here are the names of the 30 personalities that were interviewed in the Orer's special issue number 58 (2011):

Newer PostFree Fall: A collection of short stories by Leonardo Alishan
Older PostGacia Boyadjian: Balancing personal life with scientific career is one of the biggest challenges of a female scientist