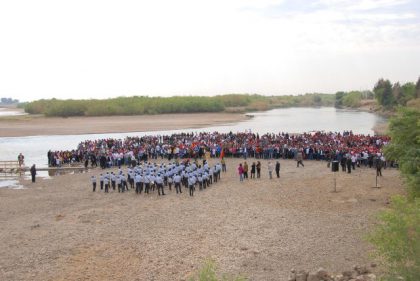 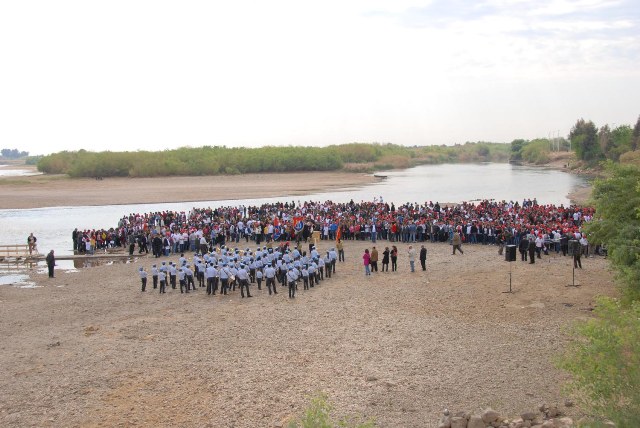 On Friday 17 April 2009, His Holiness Aram I left Aleppo for Der Zor. The desert of Der Zor is the grave for a large number of Armenian victims of the Genocide by Turkey. Pilgrimage to Der Zor was the first big event to mark 2009 as the year of Armenian Youth. The pilgrimage was organized by the Diocese in Syria and the Diocese of Lebanon.

2500 Young pilgrims, high school and university students and members of youth movements and organizations, who had arrived from different parts of the world, gathered at the outskirts of the town of Der Zor. They began their several kilometres walk to the Genocide Memorial, remembering the journey of their great grandparents, their persecution, torture and rape.

The same evening, at 7 o?clock, His Holiness Aram I joined the young pilgrims. Commemorations began with the blessing of bread and salt at the entrance of the church and a special requiem for the dead. Later, Bishop Shahan Sarkissian, Prelate of Aleppo, and Bishop Kegham Khatcherian, Prelate of Lebanon, jointly lead a candlelight Vesper service.

On Saturday, 18 April 2009, the pilgrims went to the second station of the pilgrimage, the bank of the Euphrates River, in which the bodies of many victims had been washed away. After a brief silence the young pilgrims threw flowers into the river. At the end of this solemn moment, Catholicos Aram I addressed the youth from a nearby bridge. He said: ?You should continue to challenge the conscience of the world by demanding restorative justice until Turkey takes responsibility for the Armenian Genocide. You should direct your just claims by advocating Human Rights, using political and diplomatic channels and not through violence.?   He then advised them to empower themselves through education and by choosing professions that would enable them for the pursuit of their just cause. This pilgrimage and 2009 as the year for Armenian Youth should become the driving force of this journey.

The third stop in the pilgrimage was the Holy Resurrection Church in Margadeh, which was the collective tomb for the remains of the victims that had been recovered. Rev. Dr. Paul Haydostian, President of the Armenian University Haigazian in Beirut, addressed the pilgrims.  He said: ?We are standing on this special place where the remains of our ancestors have been dissolved into the desert sand. Most of you have names that were also the names given to the persons who died here. Let us use this special moment to choose education and knowledge as the instrument to keep alive the memory of our martyrs and continue to advocate for our just cause?.

The pilgrimage ended by His Holiness Aram I sending the young pilgrims back to their countries with the message: ?You are the custodians of the Armenian cause and should, therefore, work tirelessly for the recognition of the Armenian Genocide by Turkey.?

Photos from the Genocide Commemoration in the Desert of Der Zor: