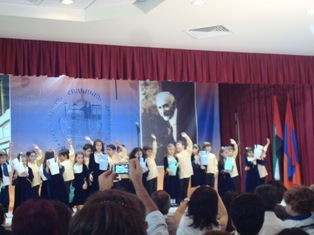 Note: Send your photos related to this event and we will post them with due credit.

On Friday, 08 May 2009, students, parents and friends attended the Ohanessian one-day Armenian School?s end of school year celebration. The event began with the UAE and Armenian national anthems.

Students from all grades took part in dancing, poetry reciting, staging and other cultural acts. About 200 people followed the program with great interest.

This year?s celebration was dedicated to the 140th birth anniversary of the great Armenian poet Hovhannes Toumanian (1869-1923). His biography was read by a student, who emphasized on those periods of the poet?s life that were most intertwined with the fate of his people. Toumanian had witnessed the great plight of the Armenian refugees who were fleeing Western Armenia.

The Kindergarten children started the show with ?countryside dance?, inspired by the hometown of poet Toumanian in the Lori region in the North of Armenia. The children repeated in turn passages from one of his poems.

The elementary students took the performance into a higher level and presented a live interpretation of the famous Toumanian work ?The death of Kikos? (1913), in which the eldest daughter of a poor family goes to the spring with a jug to get some water, but arriving at a tree near the spring she starts imagining ?One day I?ll get married, and have a son whom I?ll call Kikos. Kikos will grow up, and one day he?ll climb this tree. He?ll fall from it, and hit his head on a stone, and be killed… . Oh, alas, alas, poor little Kikos!?. All the family members come one after another to the spring and take part in lamenting the loss of Kikos.

Our students were very successful in performing the above theatrical piece, something that can lead us to think about the necessity of developing their skills in the theatrical domain.

The official part of the ceremony was full of speeches of all kind (welcome speech, speeches by the Teachers? body, the Principal, Board of Trustees, the Priest, etc).

The ceremony ended with the presenting of awards and graduation notes. 17 pupils from the Kindergarten and 5 from the 8th grade were graduated, out of 140 students who are registered in the school. According to the Principal, the average weekly attendance throughout the year was 120 students, although in average only 80 students manage to be on time for the morning prayer, before the ordinary classes.

A sad tone was detected in the voice of most of the speakers in relation to the decline of the school and the numerous problems it has faced throughout the year. This could be seen as a partial acknowledgment of the need to elevate the school into a more professional shape. The traditional Armenian school of the sixties or seventies of the last century should not serve as a model for educating our children.

After serving for two years, Principal Datev Soulian announced his resignation in a dramatic way. Behind the scenes, we were told that he will pursue further academic studies and will not be able to continue his current voluntary work.

The above article (Armenian, English and Russian) is sponsored by Hratch Brunsuzian (UAE) as part of Sponsor an Article project.