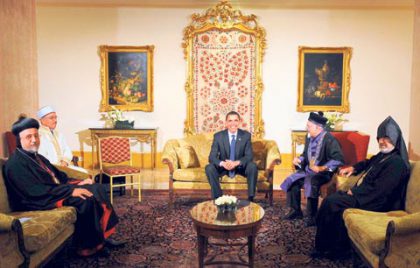 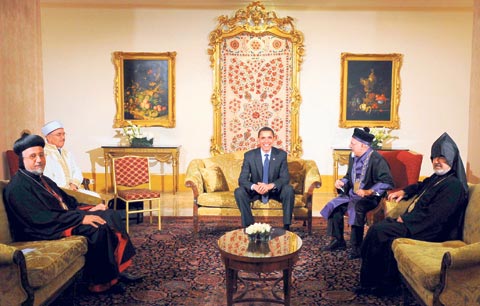 A year ago, the 53-year-old Patriarch of Turkey, Mesrob Mutafyan, was unexpectedly diagnosed with a debilitating and apparently incurable illness. His official duties were assumed on a temporary basis by Archbishop Aram Ateshian, 55, and Archbishop Shahan Svajian, 83.

There have been many puzzling questions as to the cause of the Patriarch?s illness. His doctors have announced that he is suffering from an unspecified neurological disorder and loss of memory.

Members of the Istanbul Armenian community have expressed conflicting opinions as to the advisability of replacing the Patriarch. Electing a replacement is problematic, as Patriarchs usually serve for life. However, such an important seat cannot remain vacant for long. Patriarch Mutafyan was elected to his post in 1998.
There are only about 10 Armenian clergymen worldwide who qualify to stand as candidates in a new patriarchal election, since Turkish law disqualifies those not born in that country. Two of the 10 clergymen reside in Istanbul, while the rest are in Armenia, the United States and Germany.

Since Archbishop Atesyan has already taken on many of the patriarchal duties, he may emerge as the front-runner in a future election for that post. It is therefore important for the Armenian public to be informed about his background, actions and statements.

In previous patriarchal elections, the Turkish government has indicated to the local Armenian community its preferred candidate. An early indication of such a preference would be the number of times a particular clergyman is invited to Ankara for ?consultation.?

To gain insight into Abp. Atesyan?s positions on Armenian-Turkish issues, here are several excerpts from his lengthy interview with Spiegel online, the electronic version of the prominent German Der Spiegel magazine. The interview was conducted shortly after the Armenian clergyman, along with the Jewish Rabbi, the Patriarchal Vicar of the Syriac Orthodox Church, and the Islamic Mufti of Istanbul met with Pres. Obama in Istanbul last month. The Greek Patriarch met separately with the U.S. President.

Abp. Atesyan told Spiegel that he ?spoke with Pres. Obama about the events of 1915 and told him that both peoples suffered.? He also the President: ?We, the Armenians in Turkey, are like the children of a divorce. In Turkish, we call our homeland ?Anavatan? ? that means ?motherland? ? and in Armenian we call it ?Hayrenik,? which means ?fatherland.? We have lived with our mother for the past 80 years. Now we want our parents to finally reconcile.?

Commenting on Pres. Obama?s April 24 statement, Abp. Atesyan said: ?The Turkish government is unhappy that the US president used the term ?Meds Yeghern,? the ?Great Catastrophe.? That is the common Armenian name for the events of 1915 and basically means the same thing. But there is also some disappointment among Armenians. Many wished that he would specifically use the G-word. But of course he did not. The US needs Turkey, it is one of its most important strategic partners.?

Abp. Atesyan proceeded to explain that ?Armenians have been living on Anatolian soil for the past 2,000 years, and for the last thousand we have shared this land with the Turks. Our people were like brothers ? until the tragic events of 1915. Now there is hope once again, but we should not gamble it away. Therefore the next step is diplomatic rapprochement between Turkey and Armenia, followed by the opening of common borders.?

Interestingly, he dismissed the much talked about possible formation of a ?historical commission,? by asserting that ?a closer examination of our history will not be attempted for the time being.?

When asked about the Armenian Diaspora?s demands for genocide recognition, Abp. Atesyan responded very cautiously: ?I do not want to judge them. I do not want to judge anyone. I am a member of the clergy, it?s not my responsibility to conduct historical research or raise questions of guilt. The only thing I want to say to my Turkish and Armenian counterparts is: We know that something very terrible happened to my people in 1915. We also know that Turks and Muslims suffered. And we know that today there is a chance for our people to engage with each other.?

Abp. Atesyan then commented on recent developments in Turkey: ?Yes, there is certainly a change of mentality in Turkey. Ten years ago, no one would have had the courage to ask questions about the events of 1915. This fear has receded; today one can write about the issue or discuss it on television. In comparison to the 1990s, human rights in this country have made a big leap forward. This also affects our ability to practice our religion. We are now in a position to freely renovate our churches. Until recently, we had to ask permission from the government for each new nail?. It is an unwritten law in this country that a Christian can never be a government minister or a military officer. But I believe that this could change in the future.?

The problem in giving such interviews is that Armenian clergymen in Turkey have to be extremely careful about what they say publicly, given that country?s draconian laws restricting freedom of speech. One wrong word can land them in jail or worse! In his case, Abp. Atesyan has an even more compelling reason for minding his words. He could either ingratiate himself to the Turkish authorities or have them veto his patriarchal candidacy.

The wisest course for an Armenian clergyman in Turkey is to deal exclusively with religious issues and not discuss politics, thus avoiding the possibility of being used as a propaganda tool for the Turkish government.

Photo: US President Obama with religious figures in Turkey during his visit to Turkey in early April. The first from right is Archbishop Aram Ateshian.

Newer PostGenocide Commemoration in the Desert of Der Zor
Older PostArmenian citizenship: Gathering all Armenians under one roof