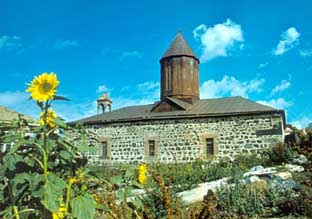 On 17 July 2008 a blast took place in the town of Akhalkalaki, regional center of the Akhalkalaki district of the Samtskhe-Javakheti (Javakhk) region of Georgia, near the house of the Chief of Police Samvel Petrosyan. There were no casualties. Immediately after the blast, the local police forces initiated an unprecedented wave of arrests
within the ranks of the activists of the ?United Javakhk Democratic Alliance? the local political movement.

Up to 15 activists were brutally arrested, some were fiercely beaten.

The police also entered the building of the Youth radio station which belonged to the same political movement. The entrance door was crushed and internal doors and windows were damaged.

On 17 July 2008 some 40 police members and civilians stormed into the house of the local activist Gurgen Shirinyan. Gurgen?s father was fiercely beaten and one local policeman, Arthur Berudjanyan, was shot dead. Police sources declared that Gurgen Shirinyan fled.

On 21 July 2008, armed and masked Georgian special forces entered the house of the ?United Javakhk Democratic Alliance? political movements? leader, Vahagn Chakhalyan, and arrested all the members of his family. Vahagn Chakhalyan?s mother was later set free, but he, his father and his teenager brother were detained in Akhaltsikhe, the center of the province. Later on they were taken to Tbilisi, where they continue to remain in custody.

Parallel to these events, the police stormed once again the building of the Youth radio station, but this time? arms and ammunition were ?found? and confiscated.

ABOUT THE UNITED JAVAKH DEMOCRATIC ALLIANCE

The ?United Javakhk Democratic Alliance? political movement participated in the local elections in October 2006, in which it got about 30% of the Akhalkalaki district votes and took 3 seats in Akhalkalaki sakreboulo (local self-governing body). Yet, the movement rejected the election results as far as it was concerned, dubbing those results as a flagrant fraud. The leaders of this political movement, and especially Chakhalyan, struggles for a long time now for the fulfillment of the Armenian minority rights. Based on this fact, ?Yerkir? (Union of Non-governmental Organizations for Repatriation and Settlement) strongly believes that Chakhalyan?s arrest and subsequent detention were purely motivated by political reasons.

?Yerkir? Union considers the recent incidents in Akhalkalaki to be the Georgian government?s unwillingness to solve minority issues, preferring instead to resort to brutal force to suppress expressions of legitimate complaint.

?Yerkir? Union therefore calls upon the Georgian government:
– to guarantee a fair and unbiased investigation of the recent incidents in Akhalkalaki,
– to immediately release from detention all relatives of Vahagn Chakhalyan and Gurgen Shirinyan,
– to immediately investigate all human rights? abuses which took place during the recent incidents in Akhalkalaki, and in particular, the human rights? abuses which occurred during the arrests, the interrogations and the detentions,
– to hold a fair and impartial investigation of the assassination of the two ethnic Armenian policemen,
– to guarantee Vahagn Chakhalyan?s rights for a fair and impartial trial.

?Yerkir? Union also calls upon foreign missions in Georgia, international organizations and institutions, international and local human rights organizations and Georgia?s human rights public defender, Mr. Subari to recognize Vahagn Chakhalyan and all his detained relatives, as well as Gurgen Shirinyan?s detained relatives as political prisoners and to take appropriate steps for monitoring the conditions of detention of all the political prisoners, to secure their right not to be subjected to torture and ill-treatment any more,
and to assure their right to be treated with humanity and with respect for the inherent dignity of the human person.

?Yerkir? Union urges the Georgian mass-media to respect the right of the Georgian and international communities to be informed and to break the information blockade around this case by providing objective and full-length coverage.

?Yerkir? Union also expresses its concern about the alarming socio-political and psychological impact which will have the recent incidents on the Armenian minority of Javakheti.

The petition is published by Yerkir Union of NGOs for Repatriation and Settlement on 06 August 2008 in the following link: http://www.gopetition.com/online/21024.html under the title “Stop Georgian State?s Discriminatory Policy“

BELOW IS THE TEXT OF THE PETITION:?

Although Georgia, as a multiethnic state, joined and ratified numerous international documents for the protection of national minorities, the actual situation in the country within this sphere is rather alarming.

The Armenian Minority in Georgia, particularly the part of it living compactly in the Javakheti region, is underrepresented in all spheres of public life. The Georgian central Government is gradually enforcing laws obliging minorities to use exclusively the Georgian language in all fields of public activity, and particularly in the self-government bodies, in the local administration and in the local educational system. Posts in the local administration, educational sphere or any other post for the holders of professional licenses are now contingent on the knowledge of the Georgian language and require qualification exams in this respect.

In addition, the Armenian Apostolic Church lacks the status of an officially recognized legal entity within the country, while its churches nationalized by the Soviet regime, still remain unreturned to their legitimate owners.

All these human and minority rights violations push the Armenian population of Georgia to leave their homeland. This deplorable outcome is a direct consequence of the intolerant policy adopted towards minorities by the central Georgian government which thus expresses its obvious unwillingness to implement in public life the international obligations it had assumed in this respect, particularly the ones assumed within the European Framework Convention for the Protection of National Minorities.

The UN Human Rights Committee in its 91st session (October 15-16th, 2007) called upon the Georgian authorities to take steps to ensure to all the equal enjoyment of the right of freedom of religion and faith and asked to insure that its legislation and practices conform fully to the international standards in practice.

The Committee expressed its concern for the obstacles faced by minorities in the enjoyment of their cultural rights, as well as for the low level of their political representation, and recommended to the Georgian government to consider the possibility of allowing minorities to use their own language at the local government and administration levels, and to take all appropriate measures to ensure adequate political representation and participation of minorities. The UN committee also required from the Georgian authorities to take steps to eliminate language-based discriminatory practices.

Despite the UN Human Rights Commission?s recommendations and despite many other alarming international reports on this same subject, the Georgian Government continues its discriminatory policy towards the Armenians of Javakheti, the last manifestations of this policy being the recent arrests and tensions in Akhalkalaki (regional center of the Armenian-populated district of Javakheti).

A blast, and later on the violent death of two ethnic Armenian policemen which took place in very obscure and dubious circumstances respectively on July 17 and 20 of 2008, were used by the Georgian authorities as a pretext to initiate on a very large scale an unprecedented wave of political persecutions, arrests and detentions accompanied by flagrant violations of human rights.

READ THE TEXT OF THE APPEAL IN OFFICIAL LETTERHEAD HERE?(PDF format)

?Yerkir? Union is an Armenia-based Union of Non-Governmental Organizations located in the Republic of Armenia, Mountainous Karabagh and the Diaspora. ?Yerkir? Union has chapters in the USA (www.yerkirusa.org) and Europe (www.francekarabagh.org).