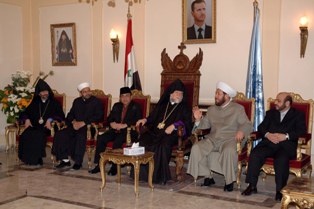 Continuing his pontifical visit to Syria, His Holiness Aram I received the Grand Mufti of the Syrian Arab Republic, Sheikh Ahmad Badr al-Din Hassoun, in the Armenian Prelacy of Aleppo on 19 May 2007. A delegation of sheikhs and lay members of the Islamic Council accompanied the Mufti. The delegation also included the Ambassador of Indonesia to Damascus.

The two sides discussed issues related to Lebanon, Iraq and the Middle East in general during that lasted about an hour. The positive role of the Syrian-Armenian community in the country was stressed and the important role of the Armenian communities in the Middle East as exemplars of religious co-existence was highlighted. The importance of the Armenian Genocide, its recognition by the West and compensation for the Armenian nation's violated rights were also discussed.

On the Armenian side, participants in the meeting also included Primate Bishop Shahan Sarkissian, Archbishop Gomidas Ohanian, V. Rev. Fr. Vahan Berberian, members of the Political Assembly, Member of Parliament Sempoul Sempoulian and the chairman of the committee on the Pontifical visit, Daron Avedissian.

Mufti Hassoun was also His Holiness' lunch guest in the Prelacy.

On the same morning, the Catholicos received the primates of all the Christian communities of Aleppo. Greeting their joint visit, His Holiness emphasized the importance of cooperation between Christian churches. He talked about the Armenian community and its characteristics, highlighting the possibilities for cooperation provided by the Syrian fatherland to all its communities.

The Primates welcomed the Armenian Spiritual Leader's visit, considering him not only the Catholicos of the Holy See of Cilicia, but also a prominent international and religious figure. The Primates expressed deep desire for theological dialogue and cooperation between churches and confidence that through such cooperation the mission of churches will be further developed. 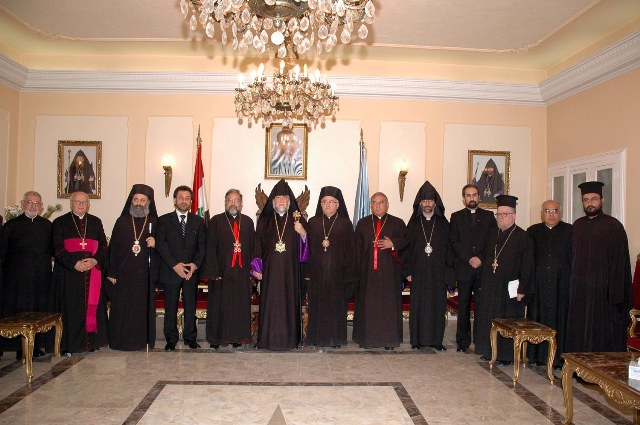