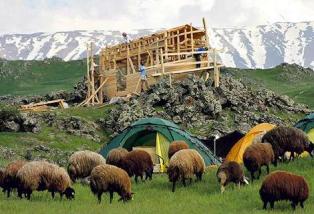 Noah's Ark, built to save humanity and the animal kingdom in the face of a great flood, is being reconstructed in model form on Mount Ararat as a warning to mankind to act now to prevent global warming.

Environmental activists are behind the initiative in the lush green foothills of the snow-capped mountain in eastern Turkey, where the Bible says the vessel came to rest after a flood had wiped out corrupt humanity.

Volunteers are racing to complete the wooden vessel under bright sunshine by end-May, to coincide with a summit of leading countries next month in Germany where climate change will be high on the agenda.

“This is directed mainly at the politicians of this earth, to world leaders who are primarily responsible for the climate catastrophe which is taking place and for the solution,” said Wolfgang Sadik, campaign leader for Greenpeace, which is behind the project.

“The aim is to put on Mount Ararat a memorial, a warning sign that also gives hope, to shake up the world and to say that if we don't react now it is too late,” he said, as carpenters hammered away at the Ark's bow at an altitude of 2,400 metres.

The U.N.'s Intergovernmental Panel on Climate Change (IPCC) has warned carbon dioxide emissions should at least be halved by 2050 to avoid climate changes which the European Union says would be dangerous.

Rising seas are a central concern of climate change. The U.N. climate panel says seas are set to rise 18-59 cms this century, up from 17 cms in the 20th century.

But there are deep divisions on ways to tackle the threat.

Germany wants G8 countries at next month's meeting to agree to the IPCC target and promote carbon trading as a way to penalise greenhouse gas emissions.

In the Biblical Noah's Ark story — well-known to Jews, Christians and Muslims — God decides to punish humanity's sins by destroying life on Earth with a flood.

He chooses righteous Noah to preserve life by saving his family and pairs of all the world's animals — which board the boat two by two.

Such a menagerie would strain the model Ark, which at just 10 metres long and four metres high would barely house Noah's family. The Bible says the original ark was 300 cubits (about 140 metres) long — longer than a soccer pitch.

The model will even be a tight fit for climbers if, as planned, it ultimately becomes a mountain hut.

Timber for the boat was hauled by horse up the mountain last week and the volunteers face logistical problems working at high altitude in a remote place.

They are also working against the clock for a May 31 ceremony, when doves will be released from the boat and an appeal made to world leaders to counter global warming: Noah sent a dove out from the Ark to see if the flood had subsided.

“A boatbuilding master said they would not have the courage to do this given the short period of time,” said German carpenter Rainer Brumshagen. “But I had the feeling that it could work.”

“It all feels very good with the energy people are bringing here, uniting those from different countries to work together.”

The political wrangling feels a world away from the idyllic slopes of Mount Ararat, where shepherds graze their sheep and swallows circle the brightly coloured tents of the two dozen activists involved in the Greenpeace project.

“But”, one of Brumshagen's carpenter colleagues said of the model Ark, “I am not so sure that it will float.”

Photo: Greenpeace volunteers build a replica of Noah's Ark on the foothills of Mount Ararat to draw attention to the threat of global warming.