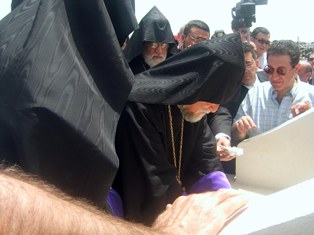 His Holiness Aram I inaugurated the new building of Haigazian School in Aleppo on 20 May 2007 adding further popular excitement to his Pontifical visit to the Syrian Armenian community.

The old building of Haigazian School which for decades served as an important center for the formation of new Armenian generations, is today being replaced by a new building thanks to the commitment and will of the Armenians of Aleppo. On the outskirts of the historic city of Aleppo in a relatively new neighborhood, His Holiness conducted a ceremonious groundbreaking service.

The mayor of Aleppo, government officials and official guests attended the ceremony, even in addition to a large crowd of community members. Among the speakers were the mayor, the Primate of the Diocese of Aleppo and the school's principal, who emphasized the importance of the school for a country and a nation particularly in the life of Armenians. The school was presented as an irreplaceable institution for the formation of new generations as exemplary humans, citizens and Armenians. In this respect, the important future role of Haigazian was emphasized.

Highlighting the unique role of the Armenian school in our national life, His Holiness called on the people to support and preserve it for the achievement of Armenians' national vision, goals and dreams. His Holiness highly praised the project of building the school planned by the community's National Authority as a means to develop the communal life and the education of new generations.

The Catholicos concluded by calling on the Armenian nation and its donors to participate in all the initiatives for the development of the life of Armenian schools and their mission as a means to support the preservation of Armenian identity in the Diaspora.

Photos:
Groundbreaking ceremony of the new building of Haigazian School, Sunday 20 May 2007 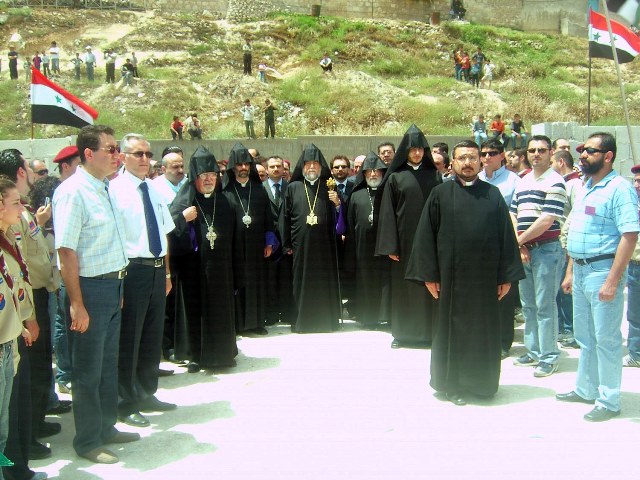