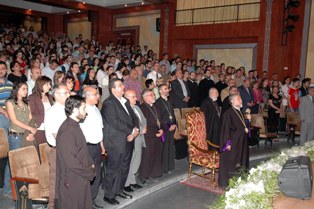 His Holiness Aram I met with the Armenian youth of Aleppo on May 21 as part of his Pontifical visit to Syria. Meetings with the driving force beyond community life, the youth, have always proved to be the highlight of Pontifical visits. This meeting had a similar effect with about 1000 young Armenians and university students with fresh ideas and future-oriented mindsets attending it.

After a brief cultural entertainment program, Primate Bishop Shahan Sarkissian underlined the importance of the meeting, focusing on the creation of a direct link with the youth and His Holiness? close interaction with them generally.

The Pontiff then delivered a speech, outlining the current global environment in which people have to live collectively. Talking on the new reality created by globalization, he pointed to its economic, cultural, spiritual and other areas of influence. Highlighting the consequences of this situation, the Catholicos spoke about the general decline in values and the increasing dominance of a new system of values in the world.

In the background of this general context, His Holiness focused on the challenges the Armenian youth faces on the religious, cultural and national fronts. Referring to the identity of being an Armenian Christian, he called on the youth to remain attached to their national roots ?to be able to find our place in the big family of nations.?

At the same time, however, based on his vast international experience, the Catholicos encouraged the Armenian youth to open up to the world. ?We can?t live in a closed box. We can?t build walls around us. We should always be engaged in a dialogue with our environment. That dialogue becomes enriching when our roots are strong,? he said. His Holiness then encouraged the youth to acquaint themselves with Armenian history, the church and national traditions, in other words with their roots.

After His Holiness? introduction, the participants asked a series of questions on issues related to the reform of the church, globalization, inter-faith dialogue, Armenia-Diaspora cooperation and Armenian and Christian education.

The meeting proceeded in a passionate atmosphere, contributing to the strengthening of the direct link between the Armenian youth and its Spiritual Leader, who demonstrated that he is also the loved and respected Pontiff of the youth. The event ended with a collective singing of ?Cilicia?.

Prior to meeting the youth, the Catholicos had meetings throughout the day with the community?s Executive Council, the Committee responsible for organizing the Pontifical visit, as well as other unions.

The Diocese pf Aleppo also published a special book dedicated to His Holiness? Pontifical visit. The 300-page book encompasses thoughts expressed by the Catholicos Aram I, during previous speeches and sermons. The chairman of the committee organizing the Pontiff?s visit, Mr. And Mrs. Daron Avedissian, funded the publication.

Photos:
1- Meeting with the youth.
2- Hrashapar Service and Achahampouyr at St. Asdvadzadzine church, Monday 21 May 2007, Aleppo 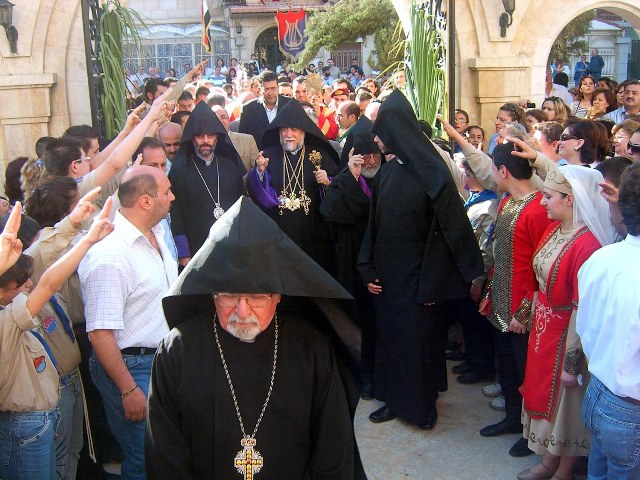