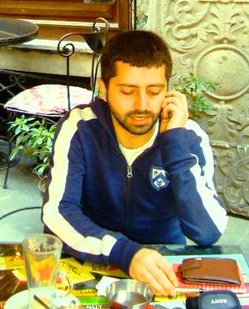 Recently a well-known Armenian Facebook group called “Facebookyan Lradvoutyun” (now defunct) was hacked by a group of Turk nationalists. Fortunately, counter measures were taken immediately and a new group was established with stronger safety parameters. The experience was useful in confronting future cyber attacks and to understand the tactics implemented by hackers. It also gave the opportunity to go through all members and to invite others to join, thus creating a wider and more determined online group. We can say the attack had its benefits.

Can you tell us about the hacking incident that happened with the group? How did you identify the hackers and what was their tactic? What kind of messages the posted once they hacked the group?

First of all, they hacked a group member (Sayat Tekir) who was an admin in our group. The person who hacked him, entered our group, removed all other admins and invited his other hacker friends and made them admins. Then he removed the hacked member (Sayat) from the admins too. This way the hacking team got the full control over our group. The hackers are apparently from Turkey, or Turkish. First they posted the Turkish flag, then started to post some nationalistic quotes. When the members of the group started to write on the wall of the group complaining about the situation they used google translate to understand them and to post replies in Armenian. In order to avoid getting exposed we started using transliterated Armenian (Armenian written in Latin characters) so they cannot translate and understand our conversations. The hackers got mad because they didn't understand our talk and started to post swear words and insults.

What is the name of your new group in Armenian? How did you manage to create and populate a new group in almost no time?

The name of the new group is “Lourer yev gaber” (Lourer yev kaper / Լուրեր և կապեր) which means “News and Links”*. Once we knew that the group was hacked many members got involved to help us saving the situation. A member helped us to find the exact chapter in Facebook help about such cases. We found out that Facebook cannot help us taking the group back. So we wrote down all the names of the existing members, started a new group, and invited all of them to the new group. All this happened in less than 24 hours. We also spotted those who hacked the group and started posting on the wall, and sent messages to all members and other Armenian groups to start reporting them to Facebook administration.

What is the message that we learn from this experience?

When we started to group, we wanted to create an equal and free sphere where almost everyone was an admin in the group. But that proved to be wrong in practice on security grounds, because once they hack one individual account they
are able to penetrate on the whole group. Now we will try to create an equally free area for the members in this new group, but more carefully.

We hear a lot from Armenia about the necessity of maintaining Internet security and the dangers losing control in  cyberspace. Have you received any help, guidance or attention from Armenians who were interested to enhance the security of the group?

I haven't got any previous help, guidance or attention from other people about the security of the group. It was just a regular group to share news and put some comments. We were not expecting such an attack. I am looking back on all this and I am laughing. It makes no sense. Actually, it only proves the low level of intellect and absurdity of those who hacked the group and started posting swears. It also turned good for us, because this incident created a kind of dynamism and activity inside the group. I received many messages and calls from abroad. And now the new group is more active than ever. I think that we should really read carefully the help section, terms and conditions of social networking sites before using. Website admins also should be careful. A single attack might destroy all you have done in a second. It's like driving, better slow and secure, than fast and reckless.

Who can be member of the group and how he/she will able to locate it especially that the name of the group is written in Armenian?

Anybody who is interested in news about Armenia and worldwide Armenians, or other news that interest Armenians themselves, might join the group. It is not a condition to be an Armenian to become a member in the group, but  understanding Armenian is important, because so many posts are in Armenian. Perhaps the name of the group in Armenian serves like a code. If you are able to type the name of the group in Armenian letters and ask for membership, then you are welcome, regardless of your race, religion, ethnicity, etc.