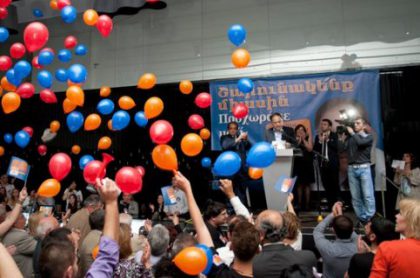 In an appearance on the Cyprus Broadcasting Corporation (RIK) Ashdjian claimed in front of Greek speaking audience that the Armenian community is divided and is going from bad to worse. He expressed regret that the current representative Vartkes Mahdessian refrained from appearing with him in the “debate”. Mahdessian clarified that the appearance was not a debate and said that he did not participate in the TV program because he had promised to “refrain from any activity that could further damage the image and unity of the Armenian Community of Cyprus”.

Gibrahayer e-magazine's editor Simon Aynedjian said in an editorial (20 May 2011) that the facts on ground show that community life is different from what Ashdjian and his supporters were trying to portray. According to Aynedjian, Nareg Schools (in Nicosia, Limassol and Larnaca) are in a steady move forward and cultural life has never been more vibrant. He pointed out that printed and online media outlets are so diversified and there is remarkable freedom of news and opinion in the community. Aynedjian mentioned that Armenian youth and families have been frequenting Armenian centers and clubs in bigger numbers, sport teams have been increased and the overall image of the Armenian community and its status in the Republic of Cyprus has been in the past years “positive and bright”. He accused Ashdjian's supporters in creating an “unholy alliance”.

In the 2005 elections, Ashdjian was supported by ARF (Dashnaktsutyun) and managed to secure 44% of the votes. In a strange twist, those who voted against him in 2005 are now his main supporters. This year Ashdjian is not supported by ARF. He has officially left the party. Instead he is supported by Hunchak party and other fractions such as the Progressive Movement of Armenian Cypriots. Ramgavar party announced that there is no reason that the party should officially support any of the candidates, thus leaving it free for its members to vote according to their preferences.

In an article published in Artsakank (13 May 2011) Arto Tavitian accused Antranik Ashdjian for being unrealistic. “You are referring to your old friends in sarcasm and you express regret that they have turned their backs on you. You have first turned your back on your old friends and your old party … for the sake of securing a seat. If you are talking about your departure from Dashnaktsutyun as a praise-worthy act, why you will be expecting support from your old friends?”, he asked.

Tavitian accused Ashdjian for misrepresenting the Armenian reality and depicting it as a divided one, while in fact, the community has never been in harmony as today. “It was the most peaceful five-year term in the history of the community”, he emphasized. He accused Ashdjian for being influenced by people of his surrounding who are still influenced by “anti-Dashnak propaganda of Soviet times”.

On 13 May 2011, around 700 Cypriot Armenians met at an election gathering in support of the current representative Vartkes Mahdessian, who assured that he would deliver his election promises, in the same way he was doing in the previous five years. “My program is familiar to you all … let us all continue together”, he announced. Ashdjian, whose pro-election gathering was attended by 200 people, expressed doubts about the number of attendants in his rival's gathering, pointing out that present were Greeks, youngsters under the age of 18 and other Armenians who do not vote.

The topics that are on the agenda of both candidates are: Constitutional rights of Armenians, the fate of the Armenian monuments in the Turkish occupied side, Armenian language, cultural and educational issues, especially the issue of getting Armenian education after the elementary level. Other issues include the situation of Armenians from Armenia who have settled in Cyprus in the last two decades, etc.

1) Vartkes Mahdessian: Business Administration and postgraduate diploma in management studies. Businessman-managing director of two companies in Cyprus and the United Arab Emirates. At the parliamentary elections of 21 May 2006 he was elected Member of the House of Representatives as the Armenian Religious Group candidate. He is a member of the House Standing Committee on Educational Affairs. He was chairman of the Armenian Young Mens Association (AYMA) in the early nineties. He was a member of the Board of Management of the English School (1998-2004). In 1999 he was elected member of the Cyprus Armenian Church Diocesan Council. Knows Armenian, Greek, English and Turkish. Born in Nicosia on 13 November 1950.