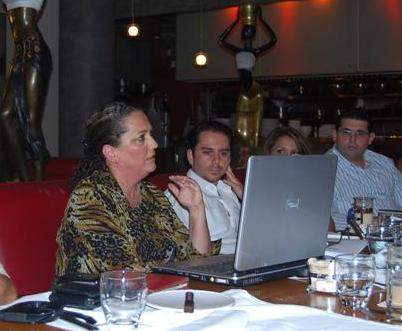 Hilda Grigorian's services to Afghanistan and Armenia were recognized by US Congressman Adam Schiff at the House of Representatives on May 24, 2011.

Grigorian, a Ph.D. candidate and expert in local government management for sustainable communities has been active in both countries. In a letter to Azad-Hye she expressed satisfaction to this recognition saying “All the hard work paid off”.?

Here is the text of the recognition:?

IN RECOGNITION OF HILDA GRIGORIAN
HON. ADAM B. SCHIFF OF CALIFORNIA IN THE HOUSE OF REPRESENTATIVES
Tuesday, May 24, 2011

Mr. SCHIFF. Mr. Speaker, I rise today to honor Hilda Grigorian, a Glendale resident who has dedicated herself to helping those in need around the world, often in some of the most challenging and dangerous locations. Hilda Grigorian was born and raised in Iran, and migrated to the United States in 1978 in pursuit of the American dream of education and career. Hilda achieved both of these goals?she obtained a bachelor?s degree and MBA and is currently working toward her Ph.D. at Walden University. She also worked in the private sector for over two decades, focusing on international development.

Hilda began her international relief efforts with a trip to her motherland of Armenia, where she volunteered to help small businesses. After several visits to Armenia?s rural villages, she established a Non-Governmental Organization (NGO) called Armenia Village Operation, which she started with her own funds and other private funding. The program implemented important projects in the rural villages of Armenia.

In 2005, Hilda traveled to Afghanistan to work with a USAID-funded program to help vulnerable, widowed women with business planning and access to funds to regain their businesses which were destroyed by the Taliban. She then worked for UNDP in the youth development project. In 2008, she began working for USAID Afghanistan as a Field Program Officer, stationed in the Province of Nangarhar, which borders Pakistan. In 2009, she was transferred to the remote, rural Province of Ghor in Western Afghanistan, where she helped people implement community development programs, created jobs through cash for work projects, and ensured a fair distribution of food to the people of Ghor.

Hilda?s selfless dedication to the people of Afghanistan has immeasurably benefited some of the most at-risk people in the world, and has demonstrated the generous spirit of Americans toward those in crisis. She thrived in an environment that afforded her very basic living conditions, with no luxuries or amenities we often take for granted.

I ask all Members to join me in thanking Hilda Grigorian for her unwavering commitment to the people of Armenia and Afghanistan and wish her well in all future endeavors.

Photo: Hilda Grigorian in Dubai in an Azad-Hye gathering in 2008.


SAY THANK YOU TO CONGRESSMAN ADAM SCHIFF:
Please write a thank you note to Congressman Adam schiff on his Facebook Wall appreciating his initiative:
http://www.facebook.com/CongressmanSchiff