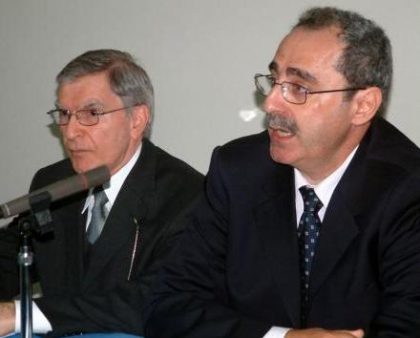 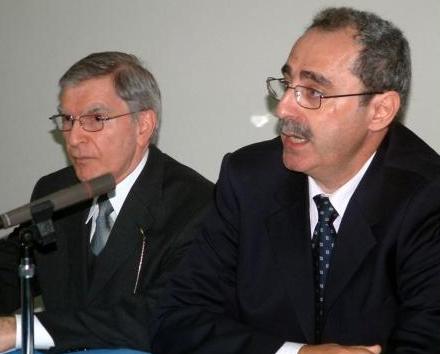 The Rev. Dr. Manuel Jinbashian delivers a lecture in Cyprus

The Rev. Dr. Manuel Jinbashian of Montreal, Canada, delivered lecture in Nicosia, Cyprus, entitled, ?The Bible: Historical reflection on the Armenian translation and its role in building the Armenian national identity?.

He then presented Rev. Dr. Manuel Jinbashian as the master mind behind the recent Bible translations into Western and Eastern Armenian.

Rev. Dr. Manuel Jinbashain gave a brief overview on the Christianization of Armenia and the need to have our own alphabet to preserve the Faith. Church masses were held in Assyrian and Greek and the leadership, then, were very concerned as to how long the Christian faith can be preserved without their own mother language. ?The Armenian nation owes a lot to Mesrob Mashdotz, Sahag Bartev and Vramshabouh, who invented the Armenian alphabet and translated the Bible into Armenian. It is through the Bible that the Armenian nation is surviving up till today,? said Rev. Jinbashian. He highlighted the strength and the beauty of the first translation of the Armenian Bible, ?Takouhi Tarkmanoutian?. He critically and with the use of Scriptural examples showed the power of the first translation in the areas of cultural adaptation and linguistic analysis. ?The First Armenian Bible was the translation of the concept and not of the word,? Rev. Jinbashian added.

Rev. Jinbashian spoke also on the ongoing Bible translation work of the Western and Eastern Armenian and the need to finish the process that had started with the late Archbishop Zareh Aznavourian. He concluded his speech by saying, ?Those Christian nations and communities who do not have the Bible in their own language are destined to die. The survival of the Armenian nation owes a lot to the translation of the Bible into Armenian?.

The lecture created interest among the attendees who asked many questions to Rev. Jinbashian after the presentation. The concluding remarks were made by Archbishop Varoujan Hergelian, who also offered the ?Bahbanitch?.

Newer PostArmenians in Georgia ask for the return of their churches
Older PostFrom Sheram to Hima, and now … Qele qele