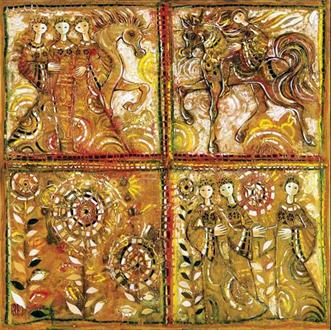 BEIRUT: There comes a time in any long-lasting career, perhaps especially in that of an artist, to look back and muse on the past. To consider successes, failures, and the path that shaped who one is today.

This is just what Armenian Lebanese painter Hrair Diarbekirian, best known by his first name alone, is set to do at Burj Hammoud?s Hamazkayin Gallery, where his exhibition ?Nostalgia? opens Thursday evening.

Founded in 2009, the Hamazkayin Gallery has promoted Armenian artists before, such as Mireille Goguikian and Arev Petrosyan. So it is appropriate that this gallery host a retrospective by Hrair, one of the most renowned living Armenian-Lebanese artists.

Born in Beirut in 1946, and still living in the city today, Hrair studied at the Lebanese Academy of Fine Arts. Known for his Byzantine-inspired paintings and his religious-inspired iconography, Hrair first gained success in the ?60s and ?70s.

In addition to achieving success in his home country, the painter is also known in Europe, the U.S and in the Arab world. Over the years, Jacqueline Kennedy Onassis, Anthony Quinn, and Liza Minelli each acquired Hrairs of their own.

His paintings are usually warm-colored ? reds, oranges and yellows are common ? and plunge their viewers into a psychedelic, almost spiritual, world. What might amaze viewers is the way Hrair combines different themes and styles together on one canvas. His women (men don?t tend to appear) have an imperial look ? clad in puffy sleeves, jewels, and headdresses ? and are often painted with horses, bright swirls of color, and what appear to be suns.

Hrair thinks people are drawn to the mystical aspect of his art. ?I have faith in my art,? he told The Daily Star in a phone interview, ?in my own style.?

Hrair said he chose ?Nostalgia? as the theme for his newest show because it is a retrospective of his decades of painting. His artistic world hasn?t changed much over the years ? flowers, nudes, floating nobility are constants ? and he sees this as a key to his success.

But his style has developed over time, and Hrair is not as confident about his new compositions as he is about his older ones. He explained, in a nostalgic tone, that he is conscious it is the style that made him famous in the past that still brings him success nowadays.

?Nostalgia,? Hrair said, is his ?contribution to the Lebanon of the ?60s and ?70s,? even though it includes more current pieces.

The nostalgia Hrair expressed fits with the sentiment of many Lebanese lately: wistfulness about a changing country, about a population drifting from its traditions. ?Beirut was beautiful,? Hrair said, ?now everything has changed, even the artists.?

A version of this article appeared in the print edition of The Daily Star on October 20, 2011, on page 16.