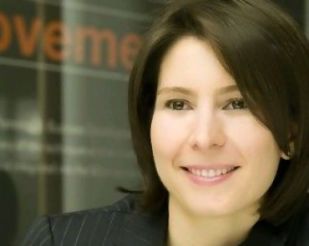 What Lara Tarakjian and her brother have built from a one-machine business in Lebanon is now a regional network of aesthetic beauty centres.

At first glance, you might be tempted to dismiss Lara Tarakjian as a petite librarian or the engineer that she almost became.

With her short brown hair, glasses and slim, bird-like figure, she doesn't even seem typically Lebanese. But you would dismiss this 32-year-old at your peril.

In less than 10 years, together with her brother Oscar, she has built up a network of 18 aesthetic medical centres throughout Lebanon and the GCC, turning over many millions of dirhams and employing 250 people. Stanford University has even written a case study about their business.

If you could buy shares in a person, I'd be tempted to fill my portfolio with Lara Tarakjian preferred.

For along with ambitious plans for Silkor, the laser hair removal business, which includes opening in Saudi Arabia and London, followed by Paris, she has already moved on to her next business called Exeed, an executive business institute aimed at providing education for busy people.

The product of an Armenian-Lebanese businessman and his wife, the siblings were brought up comfortably but encouraged to succeed in whatever they did. Lara speaks Armenian, Arabic, French and English and studied engineering in Lebanon. She was also a competitive swimmer and has an MBA.

Meanwhile, Oscar had launched a hair removal business, mainly because he himself was “hairy”. She helped him part-time while studying for her degree. After graduating, she looked around for a job, but without success.

“I still remember vividly the day when I decided it was time to focus on building Silkor into a business, and forget about electrical engineering and power plants,” she says.

Why is your business called Silkor?

It's a combination of silk and “corps”, the French word for body. It's a very luxurious brand. We try to avoid malls, even when they are prestigious, especially in this part of the world. We prefer villas, more privacy and more space. We need 800 square metres. We are selling a service, not a product.

Where did it begin?

With one machine in Lebanon. It was rather like a hobby with me helping my brother. Things went slowly, and I was still at university. Then I graduated, decided to put engineering on the side and join the business full-time. Our first salon was in the Abraj Centre in Beirut, and we had that for seven years, before opening another one half an hour away.

Why did it take so long to expand?

Because in the meantime we were preparing the entire infrastructure because we knew one day we would have many locations. We needed the structure. It was very hard. We were reinventing the wheel. We had plans for a third location, then right before opening the war started. The Israelis came to have some hair removal. We didn't shut down our centres, but we couldn't open the third one, but we still had the staff. So then my brother decided to go to Dubai and see what's there. Because of the war, we are here today. We were thinking of six locations in Lebanon and then come to Dubai. I remember we chose the location in Dubai. We were talking on the phone, I had been to Dubai before, but as we spoke there were bombs in the background.

Where are you now?

Seven in UAE including Dubai, Abu Dhabi, Al Ain and Ras Al Khaimah, Erbil in Iraq, Muscat and Doha, the rest in Lebanon.

Abu Dhabi. But it's funny. Without Lebanon, we couldn't have opened anything. Lebanon is the vitrine [shop window]. Lebanon was the brand, the name, the trendsetter. And Dubai was the gateway to the Gulf. Open in Dubai, and then you can move to Abu Dhabi and elsewhere.

But you're still a very Lebanese company?

I'd say 90 per cent of the staff is Lebanese. We are recruiting heavily. Our biggest department is our human resources department. We have a very thorough process. We even ask recruits if they are happy with their husbands. If they are not happy, they won't work well or fit in with team. We know their families, their boyfriends. It's important.

Are you still just in hair removal?

Hair removal is the core of the business, but we call them now “laser medical aesthetic centres”, for we also do tattoo removal, wrinkles, scars, for veins on the legs and also slimming machines.

And how did you finance the expansion?

We reinvest everything in the centres. The growth was a healthy one, we used some banks' loans, but the difference now is that banks come to us, rather than as it used to be when we went to them.

What about your plans for the future?

It is difficult to make plans in this region. We had plans to go to North Africa, Egypt, Tunisia, etc. The Arab Spring stopped us. We are very flexible as Lebanese and Armenian as well. That makes an explosive cocktail and we adapt. We are focusing on Saudi now, where there are lots of licensing issues.

Where does this brand go?

We are venturing into other things, my brother into real estate, me into executive education. We looked around and saw that people work, work, work and then want to enhance their education. But there is nowhere to go except an executive MBA, and that is expensive. So we launched Exeed. But Silkor will always be Silkor, it's my baby. The plans are to expand. We have also launched Silkor Foundation. We think it is time to give back. There are lots of NGOs [non-governmental organisations] in Lebanon because we don't have much support from the government.

What's been your biggest mistake?

Mistake at Silkor? We do make mistakes, but not dramatic ones. We don't regret anything we did.

Newer PostHrair leads way back to ’60s and ’70s
Older PostAround the world in 1,001 words