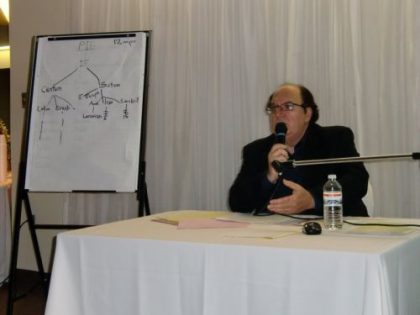 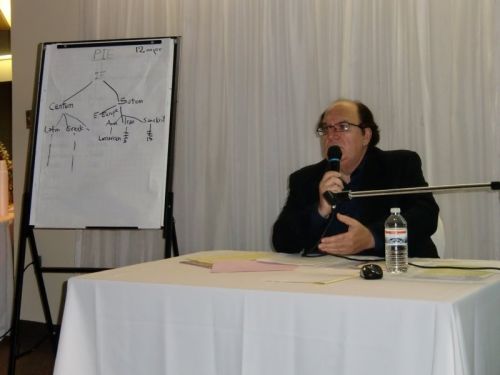 On September 30th, 2011 the Toronto Armenian community enjoyed a fascinating and entertaining lecture at the Alex Manoogian Cultural Centre on the origins and derivations of Armenian and English words.  The presentation was titled ?Around the World in 1,001 Words.?

After a brief welcome Ms. Salpi Der Ghazarian introduced the speaker ? Mr. Jirair Tutunjian ? who has, for years, studied the history of the Armenian language and words.  A graduate of Ryerson Journalism with a Masters degree in Communications from an American university, author and founding editor of numerous Canadian periodicals, Mr. Tutunjian gave a passionate lecture on the origins of Armenian and English words to a standing room only audience of over 150 people.

Mr. Tutunjian began his talk by giving the audience a brief lesson on the rules of transliteration (daratartsoutune), and why words change their spelling and pronunciation over time. To put his presentation into context, he then spoke about the Indo-European language group and its major division into East and West: Armenian being part of the east branch, together with Iranian, Beluchi, and Sanskrit in India.

With the aid of PowerPoint Mr. Tutunjian proceeded to provide a history of how and why languages borrow from one another.  With humorous anecdotes he illustrated how Iranian and Arabic words have infiltrated the Armenian and English languages, and how the English language has adopted certain Armenian words in their everyday lexicon.

Using a small sample of over 40 Indo-European and Sanskrit words which are very similar to Armenian and English, he unravelled the fascinating connections of how words have changed shape and meaning over the centuries.  The examples used were but a small sample of the vastness of this relationship that exists between words of seemingly different languages.

The audience was surprised to learn that Armenian has even given birth to a little known language called Lomavren, which is a mixture of Armenian and a Gypsy language.  As recently as 2004 it is a known fact that about 50 people could speak Lomavren in the Republic of Armenia.

Mr. Tutunjian?s presentation created a flurry of questions from the audience. In the course of 90 minutes the audience was not only entertained but had gained knowledge about a fascinating subject which most often people wonder about but seldom take the time to acquaint themselves with.

Mr. Tutunjian has been invited to give similar lectures at AGBU in Montr?al and elsewhere.