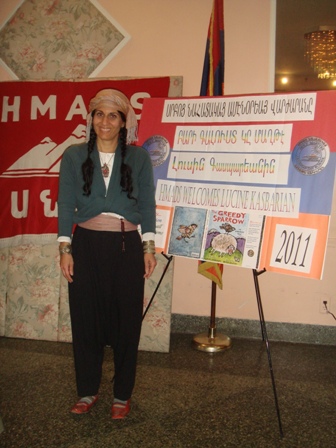 'Gar oo chigar – Once there was and there wasn?t'

The month of October is dedicated to Armenian culture and the founding of the Armenian Alphabet. The accomplishments of Mesrob Mashdotz are ?revived? over and over because of the impact it has and will have for posterity to come.

Traditionally, most Armenian schools in the US celebrate this corner stone of our rich and varied past by commemorating literary figures and enjoying dance and music.  Our Armenian heritage is infused with so many diverse elements that choosing simply one or two representatives can become a task, but it is never redundant…!

Thus, on Wednesday, October 12, 2011, this year?s presenter at Holy Martyrs Armenian Day School was Lucine Kasbarian.  This young and dynamic woman is also the author of ?Armenia: A Rugged Land, An Enduring People? with her new book ?The Greedy Sparrow? she introduced the genre of fables. Most of these tales are imaginary and they have been in the Armenian oral tradition for centuries.

The fable of the sparrow was first written down on paper by Hovhannes Toumanian. What was so refreshing to see was the way Ms. Kasbarian related to the children. She was dressed in a traditional Armenian costume and her interaction with the students was captivating. Mrs. Kasbarian also spoke about ?immersion? and preservation of our Armenian identity and how unique and authentic all of our ethnic rituals are. How can we reclaim and preserve some of our customs? Can we feel closer to our ancestors because of it? In what way can we truly honor them? The students? interest were elevated and some of their answers were: by attending Armenian schools, enjoying the instructions of their Armenian teachers, learning and singing Armenian music and going to various dance classes.

So, all of the elements are in place, the future generation has to incorporate them and use them as a vital part of their daily life. ?Yes! You can be both Armenian and American in this world,? Ms.  Kasbarian explained.  When you are deeply involved in the Armenian immersion, you are also honoring your ancestors and ethnic background; and that is exactly what the author?s objective was!  In a very endearing way she thanked her great-grandmother and father for enriching her life by introducing her to our traditions, Armenian fables and folktales.  It was magical when the voice of the author?s father resonated strongly when we heard him on tape telling the story of ?The Greedy Sparrow? in his Dikranagerd dialect. What a treat!!  Most fables begin with ?once there was and was not,? but they also carry a profound message or a lesson learned which we can still apply in modern times.

This heart -warming event was concluded by the author signing copy after copy of her book while her numerous admirers were waiting impatiently.

HMADS Students ( Kindergarten to Sixth Grade) will honor Mesrob Mashdots, Sahag Bartev, King Vramshabuh & Holy Translators with a special program to be held on  Monday, October 24, with a potpourri of Armenian songs  and recitations  from Missak Medsarents on his 125th anniversary.

For more information about HMADS- first Armenian elementary day school on the East Coast – you may visit the school?s website: www.hmads.org

Newer PostAround the world in 1,001 words
Older PostHMADS: A month packed with activities