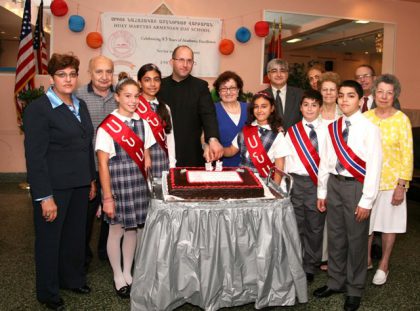 September is a month filled with new beginning, anticipation and opening doors to many educational institutions in New York State.

Let us focus and concentrate on a minuscule fraction of the whole part, Bayside, Queens! HMADS, like any other private schools, awaits and prepares to embrace its new and current students. You can actually feel the excitement, the emotional separation of parent and child and most of all the genuine care and good intentions coming from all directions.

On opening day, Fr. Bedros Kadehjian and school Board members joined the principal Mrs. Zarmin?  Boghosian as she welcomed all the students, faculty, parents and guests for another academic year. What is so special about this particular year (2011-2012) is that our beloved school is celebrating its 45th Anniversary. What an honor to all of the staunch believers and supporters of this unique school, where high academic standards, Armenian education and culture is taught on a daily basis! If there is a logo about the school it should read as follows: ?Strive for your utmost at all times!? Believe it or not, this is happening as we speak, while we are trying to live our day to day existence. Class of 2012 had the privilege to blow the candle representing 45 HMADS years and making a wish for another 45 years!

Within two weeks of instructions, HMADS students were ready to celebrate the 20th Anniversary of Armenia?s Independence. On that day, September 21st, students, faculty and parents gathered around with one purpose in mind rejoicing and expressing their pride of being able to announce to the world this event. You could feel the sheer thrill and overwhelming excitement on the faces of all students. Some were wearing the colors of the Armenian flag and the sun, blue sky, and soft wind, joined them in celebratory mood. Gathered on the church plaza, everyone sang the American and Armenian national anthems, following by a prayer led by Fr. Bedros Kadehjian. Eventually, 45 colorful balloons were released with wishes for the continuous success of the school. What a sight!

A short program followed packed with recitations, songs and a skit about government elections, told through a fable. All of the presented material was new, which in turn reiterates the following: HMADS consists of a devoted principal, teachers that can deliver students that learn at a moment?s notice and the beneficial impact of it all. The festivities continued by planting 20 plants in honor of Armenia?s Independence. What a better symbolism, showing nurture, growth and good results…!

On Thursday, September 22nd, the 4th, 5th and 6th graders were invited to Battery Park, Manhattan to greet H. E. Serzh Sargsyan, the president of Armenia. Led by their principal, Mrs. Zarmin? Boghosian and few parents, the students carried the US and Armenian flags and a large sign welcoming the president. The children sang and chanted phrases that depicted their joy and honor of being present at this auspicious event. They were able to see other dignitaries such as H.E Eduard Nalbandian, Ambassadors Tatoul Markarian & Garen Nazarian, as well as NECO Chairman Mr. Nasser J. Kazeminy and several Armenian Ellis Island medalists.


On behalf of the HMADS Family a special appreciation is extended to NECO for including HMADS students to this historical event.

I am sure this would be one of the most memorable days in the minds of our impressionable youngsters; and this is only the beginning. What fascinating and educationally challenging and enriching programs will follow?

Tune in with more upcoming events as the school is planning to celebrate the 45th Anniversary in May and 30th graduation in June 2012.

You may visit the school?s website for more information: www.hmads.org

Newer PostHoly Martyrs Armenian Day School in New York welcomes Lucine Kasbarian
Older PostSargis Hovhanisyan: Armenian children around the world should get to know one another and their homeland