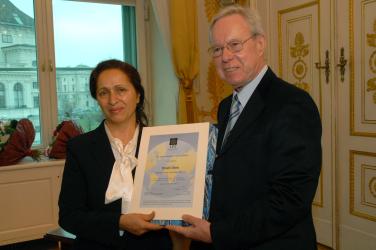 The Executive Board of the International Press Institute (IPI), the global network of editors, media executives and leading journalists, has named Hrant Dink, former editor-in-chief of the bilingual Turkish-Armenian weekly Agos, as one of its World Press Freedom Heroes.

“Hrant Dink?s nomination as our 52nd World Press Freedom Hero is a tribute to his bravery, but also an acknowledgement of his significant contribution to freedom of expression and press freedom in Turkey,” IPI Director Johann P. Fritz said.

Dink, a well-known Turkish-Armenian editor and columnist, was murdered in Istanbul on 19 January 2007. He had received numerous death threats from Turkish nationalists who viewed his journalism as treacherous.

Dink was shot twice in the head and once in the neck by a Turkish nationalist outside the offices of the newspaper he founded in 1996. He had faced legal problems for denigrating “Turkishness” under Article 301 of the Turkish Penal Code in his articles about the massacre of Armenians during the First World War. In July 2006, he lost an appeal over a suspended six-month prison sentence handed down for violating Article 301. His prosecution stemmed from an article in 2004 about the 1915-17 massacres of Armenians under the Ottoman Empire. Aside from this criminal case, Dink was also facing prosecution for a second article condemning his conviction.

Born on 15 September 1954, Dink was best-known for reporting on human and minority rights in Turkey and for advocating Turkish-Armenian reconciliation. In a February 2006 interview, he said he hoped his reporting would pave the way for peace between the two peoples. “I want to write and ask how we can change this historical conflict into peace,” he said.

At his funeral on 23 January, 100,000 people marched in protest at his assassination, chanting, “We are all Armenians” and “We are all Hrant Dink.” Since his death, calls for the repeal of Article 301 have become increasingly vocal.

The Dink murder trial opened in Istanbul on 2 July. 18 people were charged in connection with his assassination.

The IPI award was formally handed over to his widow, Rakel Dink, on 10 December 2007 in Vienna. “The murder of Hrant Dink deprived Turkey of one of its most courageous and independent voices and it was a terrible event for Turkish press freedom in general,” Fritz said. “Hrant Dink is one of at least 91 journalists murdered so far in 2007. In most cases, these murders occurred with impunity. We call on governments around the world to ensure that those responsible for these heinous crimes are brought to justice.”

The idea for such an organisation evolved in the aftermath of the Second World War and the International Press Institute (IPI) was founded on the belief that a free press would contribute to the creation of a better world.

Today, IPI has grown into a truly global organisation with members in over 120 countries. What began as a small enterprise in the early 1950's has expanded to become an ongoing dialogue between journalists throughout the world.