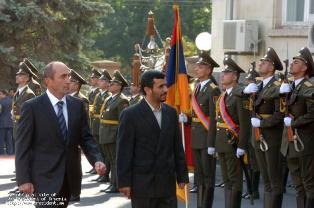 Iranian President Mahmoud Ahmadinejad arrived in the Armenian capital Monday 22 October 2007 for a two-day visit aimed at boosting growing economic and political ties between the neighbouring countries. Ahmadinejad and Armenian President Robert Kocharian were expected to sign a series of bilateral agreements, focusing in particular on energy cooperation. He was also to address the Armenian parliament and meet students and professors at Yerevan University.

?Both nations have long historical ties and much in common. Fortunately Teheran and Yerevan have common perceptions on regional issues and we want to boost this,? Ahmadinejad said before his arrival.

In March, Kocharian and Ahmadinejad inaugurated a 150-kilometre (93-mile) pipeline that will deliver 36 billion cubic metres (1.27 trillion cubic feet) of gas from Iran to Armenia over 20 years. Armenia will pay for the gas with electricity it produces at a Soviet-era nuclear plant. The two countries have also signed an agreement to jointly develop a hydroelectric power plant on the Arax river that runs along their shared border.

?We have learned that the Iranian president had cancelled all his programme today because he plans to return home ahead of time,? spokeswoman Irina Gulinyan said. She gave no further details. Ahmadinejad was due to visit the Armenian Genocide memorial and address the national parliament. Russia?s Itar-Tass news agency quoted unidentified sources as saying that Ahmadinejad?s decision was prompted by ?unexpected developments in Iran?, mostly related to the resignation of Iran?s chief negotiator Ali Larijani just days before crucial talks in Rome with the European Union Foreign policy chief Javier Solana on Tehran?s nuclear programme.

?The visit of Iranian President Mahmoud Ahmadinejad to Armenia was fruitful and his early departure did not spoil the results,? Armenian Foreign Minister Vartan Oskanian told a news conference in Yerevan. ?The Armenia-Iran cooperation is developing. Projects under implementation are significant not only for the two states but also for the whole region,? the Minister underscored.

As to signature of an agreement on creation of free trade zone between Armenia Iran, Minister Oskanian said the paper has not been developed yet. ?We have to clarify a number of Armenia?s terms and commitments to international organizations. I think the agreement will be concluded and will not be influenced by United Nations embargo on trade relations with Iran,? he said. 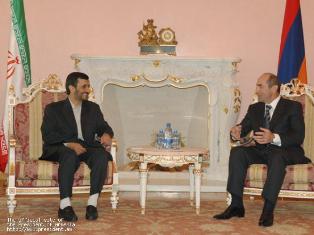 Iranian President Mahmoud Ahmadinejad has described plans to extend the Iran-Armenia gas pipeline to Europe as very promising. “The possibility of extending the Iran-Armenia gas pipeline to Europe is a very good scenario for us, and we will welcome the project,” the Iranian leader said in an exclusive interview with Armenian television, aired late on Wednesday 24 October 2007. Ahmadinejad said thorough feasibility studies should be made to extend the project, originally designed to meet Armenian domestic needs with Iranian natural gas.

The Armenian Energy Ministry has forecast that the Iran-Armenia gas pipeline will be commissioned by early 2009. The first 40 km (24 miles) leg of the pipeline went on stream in March, and the second 141 km (87 miles) leg is currently being built. The pipeline's cost has been estimated at between $220 million and $250 million.

Photos:
Oskanian and Ahmadinejad (Website of the President of Armenia www.president.am)