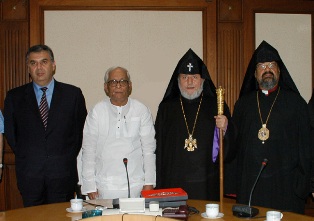 Reception Held in Honor of His Holiness Karekin II

On the afternoon of 28 February 2007, as part of his continuing Pontifical Visit to India, His Holiness Karekin II, Supreme Patriarch and Catholicos of All Armenians, met with the Chief Minister of the State of West Bengal, the Honorable Buddhadeb Bhattacharya.  The Chief Minister welcomed His Holiness to West Bengal, and reflected on the great role the Armenian community of India has had in the social, cultural and economic development of Kolkata.  He spoke of the high esteem and admiration with which the Armenians of India are regarded and expressed hope that the once large population, which has diminished in recent years, would once again grow and flourish.

The Catholicos of All Armenians expressed his appreciation to the Chief Minister for his kind words and spoke of the centuries-old relationship between Armenia and India.  The Armenian Pontiff also highly evaluated the friendship between the two peoples and expressed his pleasure at the number of Indian students currently studying in Yerevan.  His Holiness thanked the Chief Minister and all state authorities of India for the careful attention that is accorded to all religious and ethnic minorities, among them the Armenians, allowing them to prosper and create, thereby becoming worthy citizens of the Indian Republic, and contributing members of the societal, national and cultural life of India.

Also discussed during the meeting were the spheres of cooperation between the Republics of Armenia and India and the current status of the Armenian College and Philanthropic Academy and the Armenian churches, cemeteries and monuments in the State of West Bengal.

That same evening, a reception was hosted in honor of His Holiness by the Church Committee.  Among the invitees were members of the Armenian community, as well as representatives of Indian society who are associated with the Armenian College and Philanthropic Academy and the Armenian churches and community of India.

During the program, Church Committee Chairman Haik Sookias, Jr. welcomed His Holiness to Calcutta and thanked the Catholicos of All Armenians for blessing the Armenians of India with his historic visit, noting that they have greatly yearned for the visit of the Armenian Pontiff for more than 40 years, since Catholicos Vasken I came to India in 1963.

Ambassador Kocharian also addressed the guests and spoke of the growing ties and developing relationship between the Republics of Armenia and India, and mentioned the increasing levels of collaboration between the two countries in economic and educational spheres.  The ambassador also noted the great honor he has enjoyed in accompanying the worldwide head of the Armenian Church throughout the course of his visit to this remarkable Armenian community.

Following the ambassador?s remarks, in his introduction of the Catholicos of All Armenian, Rev. Fr. Ktrij Devejian spoke of the current activities of the Mother See of Holy Etchmiadzin since independence and specifically during the pontificate of His Holiness Karekin II.  He stressed the importance placed by His Holiness on the spheres of Christian education and ministry, social services, the preparation of a new generation of clergy, and cultural and youth programs.

The Catholicos of All Armenians extended his pontifical blessings and love to all of the gathered guests and thanked them for their devotion to the faith of their forefathers and their fidelity to the Mother See of Holy Etchmiadzin.  His Holiness exhorted those present to keep the Armenian College and Philanthropic Academy as a priority in their community life, stressing that the only future for the Armenians of India are the children currently enrolled and studying a the Academy.  He also expressed his appreciation to the organizers of this working pontifical visit and his thanks to the Indian people for their warm hospitality and welcoming nature which has allowed Armenians to live their creative and worthy lives in India for more than 500 years.

The evening concluded with His Holiness offering a prayer of praise and thanksgiving for the friendship and brotherhood between the Armenian and Indian peoples, and asking Almighty God to grant peace to the entire world, reconciliation to all nations and love and charity to all of His children.

1- His Holiness Karekin II meeting with the Honorable Buddhadeb Bhattacharya, Chief Minister of the State of West Bengal. In the photo: His Holiness and the Chief Minister flanked by His Excellency Ambassador Ashot Kocharian and His Eminence Archbishop Aghan Baliozian.

2- His Holiness Karekin II offering his message of blessing to the Armenian community of Calcutta during the reception. 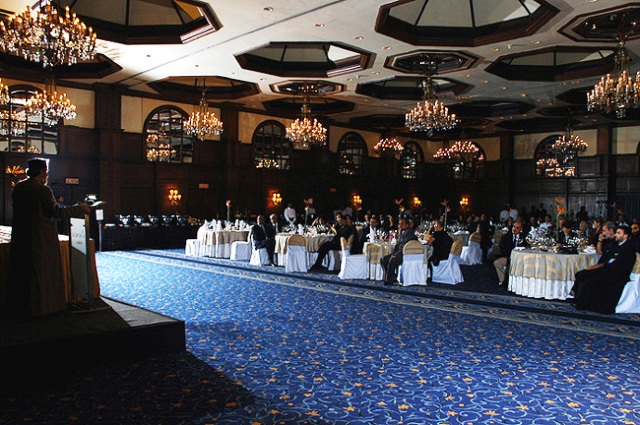