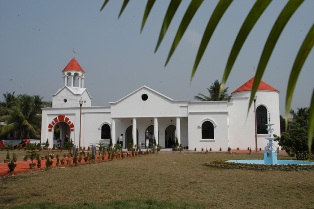 On the morning of February 28, His Holiness Karekin II, Supreme Patriarch and Catholicos of All Armenians, traveled from Kolkata (Calcutta) to Tangra to preside and offer the re-consecration service of the historic Armenian church of the Holy Trinity.  The church, originally built by the Armenian community in 1823, had fallen into disuse in recent years.  The Armenian Church Committee of Calcutta and Chinsurah renovated the sanctuary to coincide with the visit of His Holiness, so that he could offer the consecration service.

Accompanying His Holiness to Tangra were His Eminence Archbishop Aghan Baliozian, Primate of the Armenian Diocese of Australia and New Zealand; His Excellency Ashot Kocharian, Ambassador of Armenia to India; Very Rev. Fr. Oshagan Gulgulian, Pastor of the Armenian community of India; the other members of the pontifical entourage and all Armenian Church Committee members, led by Mr. Haik Sookias, Jr., Chairman.

During the service, His Holiness consecrated the Holy Altar of the church with Holy Chrism (Muron) brought from Armenia.  He was assisted by Abp. Baliozian and Fr. Gulgulian as the 16 crosses for the columns of the church were also anointed with the holy oil.  According to Armenian Church tradition, each column is named after one of the 12 apostles, two evangelists (who were not in the 12) and two Armenian saints.

The godfathers of the consecration service were Ambassador Ashot Kocharian and the seven members of the Church Committee:  Chairman Haik Sookias, Jr., Warden Sunil Sobti, Warden Susan Reuben, and members Vachakan Tadevosian, Narine Sahakian, Michael Dutt and Arsham Sookias.  At the conclusion of the service, His Holiness presented the church with a ?khatchkar? (cross-stone) from Holy Etchmiadzin to be placed in the bema on which the altar rests.

Present for the service were Armenians from the community and the students of the Armenian College and Philanthropic Academy of Calcutta.  Following the service, His Holiness toured the grounds and cemetery of the church.

Up-left photo: The newly renovated and re-consecrated Armenian Church of the Holy Trinity in Tangra.