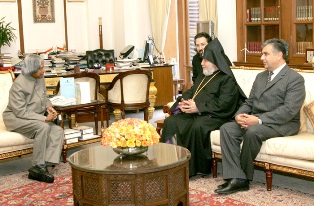 On 04 March 2007, the final day of his pontifical visit to India, His Holiness Karekin II, Supreme Patriarch and Catholicos of All Armenians, met with His Excellency Dr. A.P.J. Abdul Kalam, President of the Republic of India, in the presidential palace in New Delhi.

President Kalam welcomed His Holiness to the palace and spoke of the long history of friendship and cooperation between the Indian and Armenian peoples.  The president specifically mentioned the Armenian merchants who brought their contribution to the economic and societal development of important trade cities like Calcutta, Madras and Bombay from the 17th through the 19th centuries.

The day of the meeting between the Catholicos and the President was also a holiday in India called ?Holi?, the festival of colors.  The Catholicos of All Armenians congratulated the President on the holiday and extended to the people of India his best wishes on this festive day.

His Holiness Karekin II also expressed his appreciation to President Kalam for the careful attention and kind attitude that religious and national minorities have always enjoyed in India, and specifically thanked the Indian authorities for the freedoms and opportunities given to the Armenians to organize and create their national and spiritual lives for centuries. His Holiness mentioned that he was greatly impressed by his visits to the major Indian cities of New Delhi, Kolkata (Calcutta), Chennai (Madras) and Mumbai (Bombay), where he was able to visit at least one Armenian holy shrine or church in each city, preserved to the present day.  His Holiness further stated his happiness and pride at seeing the well-kept and maintained conditions of the Armenian College and Philanthropic Academy in Calcutta, the Armenian churches and complexes, as well as the Armenian cemeteries located throughout India.

The Pontiff of All Armenians also stressed the importance of continuing the cultural exchange of young students between Armenia and India, specifically in the universities of the two countries.  More than 800 Indian students currently study in Yerevan, most at Yerevan State Medical University, and in exchange, a number of Armenian students are pursuing their higher educations in major universities in different cities of India.

President Kalam stated his pleasure with the developing ties between Armenia and India, specifically during the last 15 years of independence.  His Holiness thanked the Indian state and people for all of the assistance provided during that time, first in the form of humanitarian aid in the years immediately following the earthquake of 1988, and later through the present day, in the form of economic development assistance in the spheres of agriculture and information technologies.

His Holiness was accompanied during the meeting by His Excellency Ambassador Ashot Kocharian, Rev. Fr. Ktrij Devejian and Rev. Fr. Hovnan Hakobian.  Also present during the meeting was Her Excellency Reena Pandey, Ambassador of India to Armenia.  At the conclusion of the meeting, President Abdul Kalam guided the Pontiff of All Armenians on a tour of his private garden in the presidential palace compound.

Having concluded his first pontifical visit to India, the Catholicos of All Armenians and his delegation returned to Armenia and the Mother See of Holy Etchmiadzin on the following day, Monday, March 5.

Newer PostBlessing of foundation for new Armenian Church in Northern Iraq (city of Duhok)
Older PostWhy do we invite them in the first place?