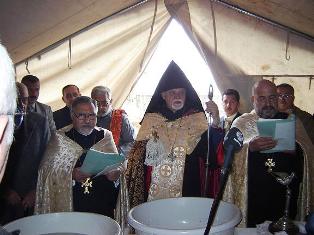 From 2-4 March 2007, His Eminence Archbishop Avak Assadourian, Primate of the Armenian Diocese of Iraq, accompanied by two priests and three members of his diocesan council, visited a number of cities in northern Iraq and met with representatives of the Armenian community.
?
On March 2, His Eminence arrived in the city of Erbil, where priests and members of the parish councils from the cities of Kirkuk, Mosul, Zakho and Avzroog joined him and his delegation.? In accordance with the Lenten Season, Abp. Assadourian offered the Peace and Rest Services in the Armenian Church of Erbil, followed by his message to the faithful.? After the service, His Eminence met with the parishioners.
?
The following day, March 3, His Eminence arrived in the city of Duhok and presided during a regional meeting with the participation of clergymen and members of the parish council of that city.? Among the items discussed were issues related to the difficulties facing the Armenian Diocese of Iraq.
?
On Sunday, March 4, the Armenian community of northern Iraq celebrated a joyous event, which took on greater significance in the current difficult environment of the country.? Abp. Avak Assadourian blessed the foundation of a new Armenian church for the city of Duhok.? As part of the service, His Eminence washed each of the 16 foundation stones with wine and water, and then consecrated each with the Holy Chrism (Muron).
?
At the end of the service, His Eminence delivered his message to the Armenians of Iraq, exhorting them to remain faithful to their Armenian Christian faith and their sacred traditions.? He also noted that although the Armenians of Iraq are far from their Motherland due to the tragic events of history, the love of Christ and the peace of the Holy Spirit will console them and lessen their yearning until they can once again return.
?
Present for the service were bishops and priests of Sister Churches in addition to the faithful Armenian population of Duhok.
?
PRESS RELEASE
Mother See of Holy Etchmiadzin, Information Services
Address:? Vagharshapat, Republic of Armenia
Contact:? Rev. Fr. Ktrij Devejian
Tel:? +374-10-517163
Fax:? +374-10-517301
E-Mail:? [email protected]
Website:? www.armenianchurch.org
March 14, 2007
?
See other Iraqi Armenian news in Azad-Hye here. 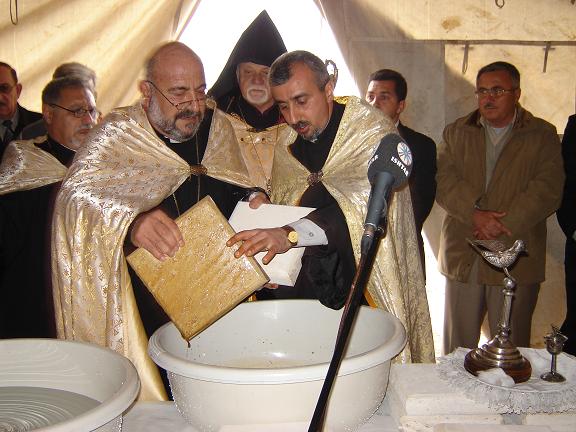