Azad-Hye: On 21 February 2007, the “Marakesh Restaurant” at The Millennium Hotel was transformed into a charming setting for the lecture “Armenia: Land & Culture”. The Cross Culture Group had invited Gulizar Jonian – on popular demand – to repeat her previous talk of nearly 2 years ago on the same subject.

A week before the presentation, it was evident that the venue will not be large enough to accommodate the increased number of attendees registering their names for this event. For quite few of them it would have been their second time around. The hotel management was kind enough to remove the restaurant seats and exchange them with ballroom chairs to gain space, thus a total number of 135 seats were accommodated. Still, a waiting list of 22 ladies couldn?t gain entry.

Near the entrance, Gulizar had arranged a display of Armenian books, maps, art publications, art work showing the Armenian Alphabet and other artifacts. This was manned by Daniela Melikian, daughter of the Armenian Ambassador.

As the audience helped themselves to refreshments, they enjoyed the auto Power Presentation of over 200 slides depicting Armenia?s natural beauty, people, monuments, paintings & folkloric dances. This was accompanied by Armenian Flute music by Levon Minassian (on CD) and followed by live music by Miss Nonna, who enchanted the audience with her violin and special selection of Armenian compositions.

Then a Cross Culture committee member Aquila introduced Gulizar by the following words: “I don?t know how to introduce Gulizar. She is an iconic figure representing the true Renaissance woman. An Architect and businesswoman involved in many charity activities”. She went on thanking her for kindly accepting to do her talk again. Another committee member, Linda, presented Gulizar with a huge bouquet of flowers.

Gulizar took the podium and addressed her audience: “I would like to thank the committee members for their trust in me and you ladies I?m truly overwhelmed with this great attendance”. She then went on “In preparing for today?s talk, and keeping in mind that most of you might not know much about my homeland, my problem was, how to talk about this ancient civilization in an informative way, without exceeding the time limit and in the same time presenting the subject in a fair and exhaustive way.”

She added “I will be talking about the history of the land, from 5000 BC till present, origin of the Armenian people, the Kingdoms, architecture, religion and alphabet, explaining how all these elements contributed to sculpt the Armenian culture through the history.? 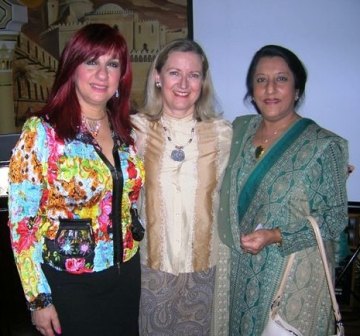 Accompanied with extensive number of slides, starting from “Karahundj”
(Armenian Stonhenge) petroglyphs of Ughtasar and Khndzoresk caves, her talk continued with the Kingdom of Urartu, the Armenian Kingdoms, the Empire of Tigran the Great, etc.

The audience was mesmerized by the beautiful architectural monuments of each period, Temple of Garni, Etchmiadzin Cathedral, churches of Hripsime and Gayane, Zvartnots, Geghard …. to name just few.

Her speech continued by covering the numerous invasions inflicted upon Armenia by Persian and Roman Empires, Byzantium, Arabs, Seljuqs, Tatars, Mongols, Ottoman and Russian Empires. How it altered the ethnic composition of Greater Armenia and impeded architecture and construction works for decades at a time. She concluded with the mass killings and deportations of 1915 when two third of the Armenian population of Anatolia / Western Armenia perished and the survivors found refuge in neighbouring Arab countries.

She told her audience (mixture of westerners, Arabs and Armenians) “Most of the Armenians you meet in the world are the grandchildren of those noble survivors including myself. I was brought up in beautiful Iraq.” She talked about the aftermath of WWI, the Peace Conference, the Treaty of Sevres, showing the Wilsonian map, the first Armenian Republic, Soviet Armenia and of course the new and independent Republic of Armenia.

Now that the bulk of the subject was covered, Gulizar talked about the Armenian Alphabet, how and why it was created, the significance of the Alphabet starting with the letter “A” for Asdvadz and  finishing with “K” for Kristos with a remark “You can?t get more religious than that!!!”

Gulizar asked her audience to check the Armenian Alphabet tablets on display in decorative forms, Terchnakir … etc in the exhibition corner. Few slides of Armenia rugs followed with a narrative of the history of the Armenian rugs and how thanks to large scale trade activities under Arab domination they were glorified over large territories. Marco Polo and Arab historians such as Yakoot Al Hamawi, Al Mugadasi, Al Fakih and others, made many remarks about the Armenian rugs and specifically about the red “kirmiz” colour used by the Armenians.

It was time to talk about the “Armenian Diaspora,” how over the years Armenians migrated across many continents voluntarily or were forcibly deported for many reasons. She talked about the Persian Shah Abbas and his relocation of tens of thousands of Armenians from their historical lands to Persia and the establishment of “Nor Jugha” city in Isfahan. She referred to the Armenians of India and their establishments in many Indian cities, Armenian traders of Malaysia and Singapore, the Armenia quarter in Jerusalem and finally the Island of St. Lazarus near Venice and its famous guest Lord Byron.

Here, Gulizar paused to narrate a situation always repeated when Armenians meet non Armenians for the first time: “We always expect everybody to know who we are and where do we come from. When we introduce ourselves as Armenians and the other person looks confused about our identity, we start talking about our long history. When we are asked about our religion, we frown unbelievably expecting that the whole world should know that we were the first state in the world to accept Christianity as our state religion. The same when we are asked about our language, we go on lengthy explanations about our sacred Alphabet. Still, if we think our friend is not impressed, we ask “Do you know Charles Aznavour?”, when the answer is Yes, we know we won and happily say “Well, he is Armenian!”. The audience roared in laughter.

Gulizar said that she has tried very hard to stay away from such practices but as she meets new people all the time she ends up in the same situation. “Ladies, I did it again today, I talked to you about our history, language, religion so what did I leave out … Charles Aznavour? Then, we must see together The Armenian Hall of Fame”.

The screen lit up with array of Internationally known Armenian personalities starting with … Charles Aznavour and Cher, continuing with Alain Prost, Atom Egoyan, Dr. Raymond Damadian, Gregory Peck, Yousuf Karsh …. etc and finishing off with author / playwright William Saroyan. That?s when Gulizar said: “I would like to conclude with his words describing the survival of our nation.”

“I should like to see any power of the world destroy this race, this small tribe of unimportant people, whose wars have all been fought and lost, whose structures have crumbled, literature is unread, music is unheard, and prayers are no more answered. Go ahead, destroy Armenia. See if you can do it. Send them into the desert without bread and water. Burn their homes and churches. Then see if they will not laugh, sing and pray again. For when two of them meet anywhere in the world, see if they will not create a new Armenia.”

With these words the last slide showed Armenian girls, in national costumes, their arms high up dancing under the words “Rebirth of a Nation”.

This was the finale of one and a half hour of talk, where the audience listened attentively, without any interruption and took many notes.

After the applause, Linda thanked Gulizar: “Thank you so much Gulizar. Ladies, we all know how she works, how she mobilizes and inspires people, she is a social catalyst. This is all her work and we all love her.”

The floor was open for Q & A:
Many questions were asked, lots of interest created about Armenia and Armenians. Gulizar answered questions covering a wide arc of topics, from historical monuments to Armenians in Diaspora, Armenian paintings, music and cuisine.

The ladies approached Gulizar one by one to congratulate her and thank her personally for most interesting and informative talk.

Read here about the first edition of the same presentation two years ago as reported in Azad-Hye.
Azad-Hye Directory on Gulizar Jonian.

Below photo: Group of Armenian ladies in Abu Dhabi attending the lecture (Gulizar Jonian fourth from the right). 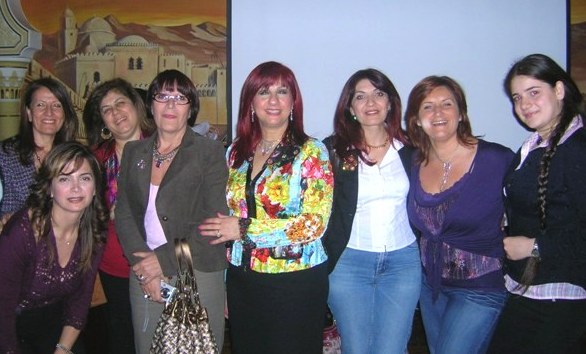