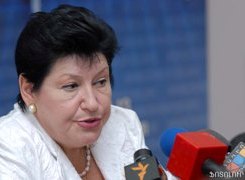 ?Israel has not recognized the Armenian Genocide yet, as it can damage its national security and many economic projects can remain incomplete,? the president of Jewish Community in Armenia Rima Varzhapetyan told a press conference in Yerevan today (12 August 2010).

She noted that Israel cannot endanger its good-neighborly relations with Turkey.

Rima Varzhapetyan is sure that the genocide issue will be again heard in the Knesset (Israeli Parliament) and she hopes that on the 100th anniversary of genocide (in 2015) both Israel and US will recognize the Armenian Genocide.

Thre are about 320 Jewish families in Armenia, counting 1000 Jews, she informed.

According to her, Israel has not expressed the word Genocide yet, but this does not mean that Israel does not recognize the Genocide. “Those who are aware of the genocide recognize it, but we must take into consideration the fact that a lot of people don?t know about it. In the Israeli schools pupils are taught about the genocide but the events are characterized as slaughters. The Jewish Community has made efforts to make the issue of the Armenian Genocide heard in the Knesset,? she said.

?The Turk-Azerbaijani lobbyist groups are too big in the Knesset. However, in the same Knesset thre are people who are quite well aware of the history and who struggle for the recognition of the genocide, not as opposed to Turkey but for the historical justice,? she added.