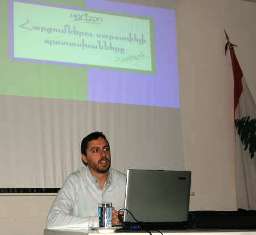 ANTELIAS, Lebanon – The Armenian Church University Student?s Association (ACUSA) organized a lecture on drug addiction and the youth in its center in Antelias on 3 March 2007.

Given the gravity of the problem specially among the youth, several international organizations have embarked on active campaign to fight against drug addiction. Such organizations also exist in Lebanon. Among them is the Armenian ?Horizon? organization of fighting against this dangerous threat to the young generations.

Houry Djinbashian and Harout Arabian from the ?Horizon? organization talked in detail about drug addiction among the youth today, giving concrete examples of the dangers addicts face and how they are destroyed physically and spiritually. The presentation was followed by a discussion period during which attendants raised concerns and asked questions for further explanations.

The event served as a warning for caution given that drug addiction is also a widespread problem in universities and a challenge to start a collective fight against this dangerous and destructive habit.