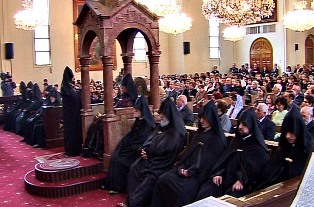 ANTELIAS, Lebanon – The 40-day anniversary of Armenian journalist and editor of the Istanbul-based ?Agos? bilingual newspaper, Hrant Dink?s martyrdom was commemorated by a requiem service in Antelias on 4 March 2007. Government officials, representatives of political parties and a large number of believers attended the service, which was followed by a commemoration event in the ?Cilicia? museum of the Catholicosate of Cilicia.

Primate of the Diocese of Lebanon, Bishop Kegham Khatcherian, chaired the event on behalf of His Holiness Aram I. The event brought together several guests including the chairman of the Union of the Armenian Evangelical Churches in the Near East, Reverend Soghomon Kilaghbian, Members of Parliament Hagop Pakradouni and Farid Khazen, secretary of the Press Syndicate, Fouad Daaboul, representatives from the three Armenian political parties, cultural, educational and charity organizations, the mayor of Bourdj Hammoud, Antranig Meserlian, and a large number of believers.

Following the Lebanese National Anthem, the attendants observed a minute of silence as a tribute to the memory of the journalist assassinated in Istanbul in January.

Loutfig Ayvazian delivered the opening remarks, after which Member of Parliament and a lecturer in Political Science at the American University of Beirut, Farid Khazen, pointed out that heroes do not depart by people?s tears, but by their claps and greetings.

Khazen considered Dink to be a martyr of justice and freedom, expressing support for the idea the journalist defended in his lifetime. He assured that the incident was not simply a murder, but Genocide.

Fouad Daaboul, the Secretary of the Press Syndicate and editor of the ?Anwar? newspaper pointed out that Dink?s assassination comes at a time when Turkey wants to join the European Union. As such, through his death Dink sent a message to Europe and the whole world that the membership of a country like Turkey in the European Union is not possible.

Speaking about the Armenian nation?s resilience, Daaboul said that despite all the difficulties and torture they faced, Armenians had successfully preserved their identity and their cause, a fact for which Hrant Dink vouched for.