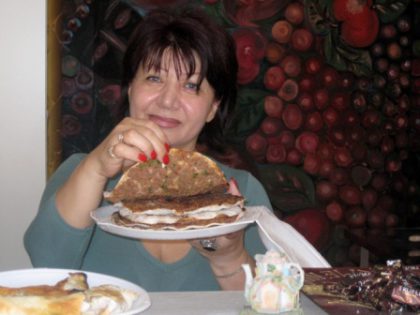 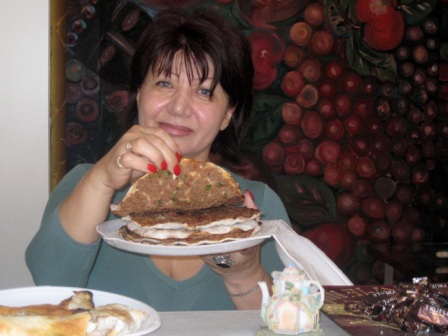 How we discovered Little Armenia is a study in how hospitality functions.

Frazzled after trying to fit too many things into one Saturday morning in the capital city, coffee and a rest had become an urgent craving, but we were walking on a street with no coffee-shops. Suddenly a colourful wall of brightly painted peaches, apricots and pomegranates, in rich reds and oranges, burst into sight. Two shaded tables and chairs on the pavement seemed to be waiting for us.

We received not only Armenian coffee, but also all the attention of the owner, who sold us on her country while refusing pay for the coffees she served us.

After this sort of experience, one must pay another visit. We returned for a bite of Alvard Karapetian?s lavash and more tales about her ancient country, Armenia, which she left with her two children many years ago.

Ala, as she is known, grew up in a house where the art of cooking was handed down from one generation to the next, and where it was considered a misfortune to eat by yourself. If need be, her father would invite in strangers from the street to share their meal. People Ala had never met before came to the funeral of her parents, saying ?We had had such lovely meals in this house?.

Armenian cuisine is over 3,000 years old and comprises over a thousand dishes. Many are strong and spicy.

The menu at Little Armenia is limited to a few items, but many more are available by order, from 10 to 10, seven days a week. The premises are constantly busy with take-aways, but it is not one of those dens of frenzy that I always find so inhibitive to relaxed eating.

The lavash is a paper-thin, light, almost crackly circle of bread made without yeast and is spread with spicy minced meat (a mixture of lamb and beef), folded and eaten with the fingers (like Napoleon, says Ala).  There is no trace of oiliness.  The same bread can also be filled with halloumi, served folded into small parcels that ooze melted cheese. It reminds me of Camembert phyllo pastries.

Dolmades made of grape leaves or cabbage leaves filled either with meat, bulgur wheat (pourgouri) or rice are an essential part of Armenian food and so is the barbecue of skewered lamb, pork, eggplant, onion, peppers and mushrooms known as khorovats, all available by order. Teas handpicked in the Armenian mountains, Armenian coffee and traditional sweets such as Napoleon cake are available in this far-flung pocket of the Caucasus.

One of Ala?s special treats is the meat delicacy known as pastourma with its pepper coating. Three days whetted in peppery spices, three days left to dry, it is soft inside and pairs perfectly with cognac or red wine in winter.

If the secret of a foreign restaurant is to transport the visitor to that country by dint of the atmosphere and the food, there is no doubt that Little Armenia says Bari Akhorzhak (Bon Appetit) in the most genuine way imaginable.