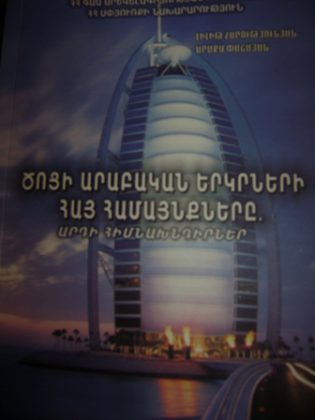 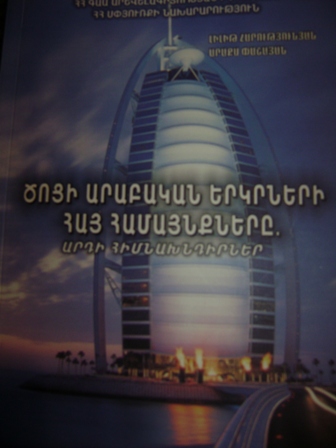 A bright page of Middle East Armenian community life has come to an end.

– What caused you to be interested in the Gulf Armenian communities, to the point of writing a book about them?

Pashayan: Interest in worldwide Armenian communities has never ceased in Armenia. Issues concerning Diaspora Armenians constantly appear on the agenda of many official bodies and scientific institutions. The current research has been carried out by the Institute of Oriental Studies with the order and financial grant of the Ministry of Diaspora. I believe the topic is very contemporary and narrowly studied. We know very little about the Armenian communities in the Arab States of the Gulf (unlike Syria or Lebanon). This, apparently, is not justified, since Armenians of Kuwait and UAE have a very active Armenian community life. Schools, churches, unions, associations and many other national structures function in the region. This is the first time we attempt to learn about them. It would be worthwhile if the book is translated into English.

– What idea did you have about the Armenians of that region before starting your research and to what extent this idea might have changed now?

Harutyunyan: Before starting the project, as Arabists we certainly had some understanding of the Armenian communities in the Gulf. We knew that the formation process of these communities has been initiated in the 1950s, first in Kuwait and later in other countries in the region and that it is directly related to the increase of oil production and the emergence of new labor markets. A more detailed study gave us the opportunity to understand that, in contrary to traditional communities in Syria and Lebanon and other communities in Arab countries, the ones in the Gulf region are the reproduction of Diaspora communities. They are actually the result of a new phenomenon: the inter-Arab movements. Even though these communities are relatively young, they have been keen in preserving the Armenian national identity. One of the reasons is that, these Armenians have immigrated from densely populated Armenian communities in the Middle East, bringing with them the same sort of collective organizational experience we have witnessed in their former societies. It is interesting to observe that, especially in the case of Kuwait, cases of mix marriages are very limited, the majority of Armenians speaks their mother tongue, including the new generation, a situation that can be attributed to the presence of the daily Armenian school, which has a history of more than 50 years. Armenians there are remarkable for their high sense of national identity. As a researcher what has caught my attention is the fact that within the communities there is close cooperation between the different religious and ideological sectors. For example, in the Diocesan Assembly elections, members 18 years and older have the right to participate regardless of their religious denomination (Apostolic, Catholic or Evangelical), which is unique phenomenon in this Diocese and in the wider Armenian Diasporan church life.

– Did you encounter any surprises or unexpected obstacles or unexplainable issues during the course of the preparation of the work?

Pashayan: No, Everything went on smoothly. The only problem was that we were not having a field work. It is somehow difficult to fathom all the issues while sitting here in Yerevan. It took a lot of time for us to digest the subject and to reach to conclusions. Azad-Hye website helped us a lot, as the material published there during different times best reflected community life in the Gulf. We significantly benefited from the support we received from the Catholicosal Vicar Bishop Shahe Panosian, parish priest of the Armenians in UAE Father Aram Deyirmendjian, Principal of the Armenian School of Kuwait Dr. Manoug Manougian, also from Hrach Kalsahakian, Tamar Der Ohannesian, Gulizar Jonian, Hratch Brunsuzian, Ara Khacherian and others, for whom we are very grateful. We are very interested to receive the views of the local communities about the book. We are waiting for some feedback.

Who can benefit from this research in particular?


communities in the region. An attempt has been made to describe the existing problems in the context of the future of these communities. The conclusions and the recommendations may assist the Ministry of Diaspora to clarify its position on the issues related to Middle East and Gulf Armenians. The book is envisaged for specialists in Arab studies, researchers on Middle East Armenian issues and a wide range of readers.


– What is your message to the individuals overseeing research and archival work in the Diaspora? Can they create better conditions for researchers? How could this be achieved?

Pashayan: As far as archival material is concerned, I find difficulty in answering, because, as mentioned, we did not conduct a field research. We benefited a lot from the work of Dr. Shogher Ashekian (“A Quarter century: Armenians in Dubai and the Northern Emirates”), who has used archival material. In any case, the people in charge should support any research activity especially if it is done competently with the aim of benefiting the public. Huge amounts of money is spent on political, partisan and advocacy works, while many other domains, including intellectual works, are often ignored, especially if they do not follow specific ideological orientation.

– This is the second Middle East related research that you have published, the first being your work on Syria. Are you planning to cover other communities in the region or somewhere else?

Harutyunyan: Indeed, the Armenian communities in the regions are facing serious challenges, related to the overall processes taking place in the Middle East. It is obvious, that in many Arab and Islamic countries an outward movement of Christian population is noticed, a trend that will continue in the future. From Armenian perspective, the developments in Syria are the most painful. The Syrian Armenian community is considered a major community and its loss can create serious implications, not only for the Syrian Armenians, but also for the other Armenian communities in the region.  I believe the Republic of Armenia can play a significant role here. Considering the experience of Iraqi and Syrian Armenians, their resettlement in Armenia and the lessons learned from both cases, I believe Armenia should be prepared to receive Middle East Armenians who wish to come to Armenia and should create favorable conditions for them.

Pashayan: Indeed, the Armenian communities in the Middle East are quite vulnerable. All conflicts occurring in the region have resulted in the shrinking of the number of Armenians. Lilit has referred the case of the Lebanese Armenians. I can mention also the case of the Egyptian Armenians, after the arrival of Nasser. I can also mention the case of the Iranian Armenians, after the Revolution and the Iraqi Armenians after the 2003 invasion of Iraq. Many examples could be brought in this respect. In any case, the Middle East Armenians communities, including the Syrian Armenians, will not return to the way they used to be. During the Fatimid reign in Medieval Ages, there was a thriving Armenian community in Egypt, but now only a thousand Armenians live. It is a fact that the “Arab Spring” has caused great damage to the Christians in the region. I believe the religious factor will be stronger in Arab and Islamic countries in the future and the extremist temper will grow. New wave of immigration will result from the deterioration of the economic sphere, the long lasting instability, issues related to security, the inefficient educational system, etc. In this regard, my viewpoints about the Syrian Armenian community are not optimistic. I can say that a bright page of the Middle East Armenian community life has already come to an end. It would have been really good if Armenia were capable of receiving, in a proper way, all compatriots who wish to settle down here.

Newer PostHovsep Khurshudyan: Heritage party is struggling for a new Armenia
Older PostKaren Sargsyan does not give the French Armenians a chance to feel nostalgic for the Armenian songs