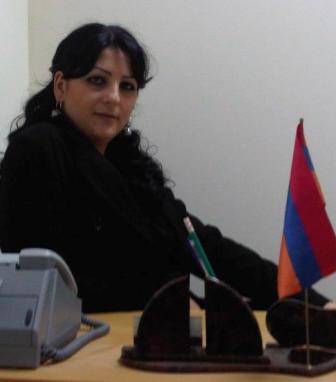 Armenian natural stones and especially the tuff stone is very much known in the civil construction in Armenia. A quick look at the Republic Square in the center of Yerevan will reveal that almost all the governmental buildings there are constructed by this orange colored natural stone, which has become the symbol of Yerevan.

Nora Sanamyan is from the city of Gyumry, the second city in Armenia. She graduated with Master's degree in the political field and came to the United Arab Emirates in 2002, where she established a company called “ARMENIA FZE” in 2004 first in Fujairah and then relocated it to the Emirate of Ras Al Khaimah (Free Zone).

What are the characteristics of the Armenian tuff and how can it be used outside Armenia? Is it easy to export it? Are there any environmental regulations for it?

The company “ARMENIA FZE” is exclusive distributor / agent for the Armenian natural stones (tuff, felsite, basalt and travertino) in the Gulf region only. Armenian natural stones and especially tuff are gaining popularity not only in UAE market but also in Saudi Arabia and Qatar. Tuff has unique characteristics as it provides 30% better protection from winter cold or summer heat compared to other stones. It keeps the house warm in the winter and cool in the summer. It has also several medicinal properties. Lung disease sufferers for example feel more convenient in rooms decorated with tuff. It can be used for indoor and outdoor decoration. We are shipping the material through Georgia.

How can the demand for the tuff be increased in the Gulf region and other regions in the world? 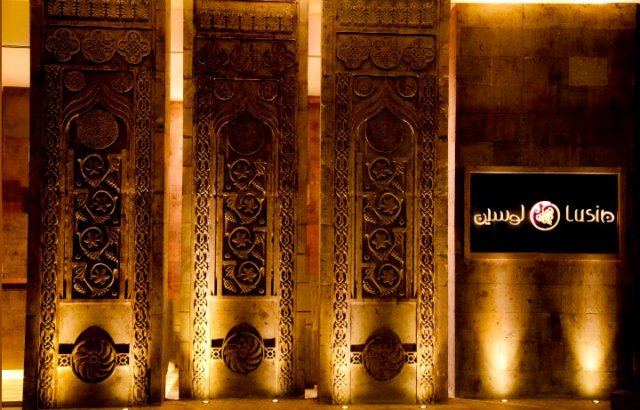 Tuff stone is famous in Russia. It is used for frost resistance. Many affluent Russians are wall cladding their villas by tuff. In the Gulf region the demand for tuff is increasing because it has unique colors (colors never chang), easy to work with especially in making engravings and unique architectural designs. I can mention two examples: The building of the Embassy of Armenia in Abu Dhabi and the “Lusin” Restaurant in Saudi Arabia (see photos).

We particularly are informed about the experience of Lusin restaurant in Riyadh. How did the idea start? Who was behind it? Who runs the restaurant? There are verses from Armenian poets on the walls. Whose idea was it?

The owners of the restaurant found my company through the internet. They searched for Armenian tuff suppliers in the Gulf and found ARMENIA FZE.  Their project is completed now and the restaurant is functional since March 2011. The owner of Lusin Restaurant is Mazen Almugbel, A Saudi Arabian from Riyadh. He was in Armenia and he loves the Armenians, their culture, food, etc. After visiting Armenia he decided to open Armenian restaurant in Riyadh, the capital of Saudi Arabia. His friend is a Lebanese Armenian Vahe Yazedjian, who is project manager in an interior design company in Saudi Arabia and has created the restaurant design based on Armenian poetry verses on the walls. You can read there poetry by Siamanto, Silva Kaputikyan, Daniel Varujan, Grigor Zohrab and others.

Lusin Restaurant is a kind of small Armenian world in Riyadh. Thanks to this restaurant many people have started their interest about Armenia and the Armenian culture. Saudi Arabians like Lusin restaurant very much. It has become a hit due to its unique style, decoration and food. Hopefully, the legacy of the Armenian tuff stone will continue to grow in the world of natural stones.

Click to see more photos and to read the Armenian verses on the walls: