A Wells Fargo Bank Vice President (in the United States) and branch manager, Talin Amirian completed a month of voluntary work at Orran, a center for needy children and elderly in her homeland, the Republic of Armenia.

Ms. Amirian was a participant in Wells Fargo's community reinvestment program whereby the bank employees receive up to four months of volunteer leave, receiving full pay and benefits.  Unlike most employees who choose a program close to home, Ms. Amirian crossed the ocean to reach her favorite charity, through which she had been supporting a needy family by a monthly personal contribution.

Orran is a charitable organization founded in Armenia in 2000.  Its mission is to help vagrant children by providing a hot meal, tutorial, psychological, social and medical services.  It also serves as a soup kitchen for the elderly who come to the center in the morning when the children are in school.

Ms. Amirian's full time job at Orran involved assessing the operations of the center to make sure that the organization was using its resources most efficiently.  In this connection, Ms. Amirian worked very closely with the 70 young and 48 elderly beneficiaries.  She visited the destitute families, interviewed the parents, tutored the
children in their studies,

`I had a wonderful month working at Orran and feel very fortunate to have had the opportunity to spend time with such a great organization. It was rewarding to learn from its beneficiaries.  Each and every one of them touched my heart and taught me to be a better person.  Orran is a wonderful organization with a noble mission, and it carries out its vision every single day.  Orran has become a part of me, and I will always cherish this experience'.

Perhaps it was Ms. Amirian's BA degree in psychology or her boundless love for children that translated this relationship into such a beneficial one for both sides.

Tony Turner, CEO of HSBC bank in Armenia and Orran Board member expressed Orran's appreciation, `We are very grateful to Wells Fargo Bank for giving the opportunity to Talin Amirian to provide such an important service to Orran.  We are constantly looking for ways to spend the contributions of our donors efficiently and to impact as many children and families as we can.  Ms. Amirian's helpful suggestions to improve parts of our operations are seriously being considered and implemented'.

As Ms. Amirian summed up her experience `I believe that the greatest gift I can give to myself is to give of myself to others'.

During the past decade, Armenia has experienced profound upheavals and drastic changes in its socio-economic systems. Vital basic social services have become less available and accessible, particularly for the most vulnerable population groups. Widespread poverty is particularly prevalent among the uneducated, unemployed, disabled, elderly and families with many children.

There are more than 14,000 children who do not attend school in the Republic of Armenia because their families are unable to meet the basic costs of their education. Social vulnerability and economic deprivation in families have also contributed to an increase in the number of unaccompanied children and children living and working on the streets. Some of these children have resorted to begging, others to selling flowers, and some to simply picking food out of the garbage. This problem is becoming more serious every year.

As well, the elderly constitute one of the largest socially vulnerable groups in Armenia. Lonely pensioners living on fixed incomes are often unable to meet their basic living needs; in addition, their access to other vital social services is limited. They are often isolated and lack socialization with others on a regular basis.

To assist in the mitigation of these adverse conditions, ?Orran?, a non-governmental organization (NGO), was established in April 2000. The location of this Armenian charity is in the center of Yerevan. Orran, which means “haven” in Armenian, is working to decrease the disparity between the needs of these at-risk groups and the availability of essential services.

Raffi K. Hovannisian with his wife Armine K. Hovannisian is the founder and honorary member of Orran. He served as independent Armenia's first foreign minister in 1991-1992. He has a JD from Georgetown University Law Center and a MMLD from the Fletcher School of Law and Diplomacy, Tufts University. Mr. Hovannisian is the founding director of the Armenian Center for National and International Studies. He has held a number of positions namely Executive Chairman of “Hayastan” All-Armenian Fund (1998) and Chief of Department of Information and Publications in the Republic of Armenia. He is also the founder and director of the Armenian Bar Association.Mr. Hovannisian practiced international law and civil litigation in the firms of Hill, Farrer and Burrill, Whitman & Ransom, Stroock & Stroock & Lavan, Coudert Brothers (1985-1989); and was a lecturer of Armenian History at Tufts University (1981-1982). Raffi although a founder, he is not a member of the Orran Board.

Armine K. Hovannisian with her husband Raffi K. Hovannisian founded Orran in the year 2000. She was born in Armenia, and moved with her family to the United States as a young child. She holds a B.A. in Diplomacy and World Affairs from Occidental College, and is a graduate of the School of Law of the University of California in Los Angeles. She was a practicing civil litigator in Los Angeles prior to moving to Armenia more than ten years ago with her husband, Raffi, and their children. Before assuming her current post as Executive Director of Junior Achievement of Armenia, Mrs. Hovannisian was the Director of Project Hope. The Hovannisians are the parents of five children, ranging in age from six to sixteen years. Moved by the plight of the street children in Yerevan, the Hovannisians founded Orran in April 2000, with the initial intent of assisting sixteen vulnerable street children. Ms. Hovannisian serves as the Chairman to Orran Board of Directors from its inception until now.

Photo: Orran Summer Camp
About 100 children enjoy the hills of Tsakhkadzor over the summer months every year as part of the Orran activities. 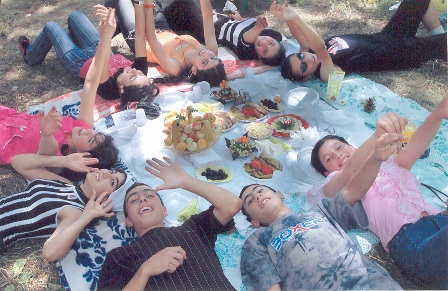 Newer PostSona Yeghiazaryan: My biggest dream is to have my own art school
Older PostEmbassy Announcement: 'Taste of Armenia' (Cultural Extravaganza Week!)