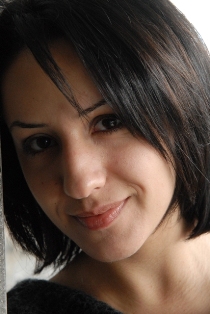 Autumn is already here; fresh, colorful yet beautiful and charming. Through its colors I introduce a young Armenian multitalented artist; Sona Yeghiazaryan; painter, singer and photographer too.

Sona Yeghiazaryan is born in Armavir, Armenia in 1985. Her father is artist-Designer Mels Yeghiazaryan (a wood sculptor and interior designer). She started drawing when she was two years old and had two exhibitions in pre-school. From 1992 until 2000 Sona studied at the Public School of Armavir, then from 1992 until 2006 she had several personal exhibitions in Armenia, Belarus and the USA. In 2001 Sona participated in the International Young Drawings Festival in Minsk and exhibited in the Art Gallery of Marc Chagall.  During the same year she was awarded first place in the Armenian National Placard Competition ?Children Against Smoking?. In 2004 Sona was recognized as one of the winners of the 20th Annual Artist?s Magazine Art Competition. In the US her work has been exhibited in various well known venues such as the Cooper Union and Pen and Brush in NYC as well as the Donald B. Palmer Museum in Springfield NJ. She paints with oil, acrylic and watercolor and her art dwells on the boundaries of realism and abstraction.

It is also worth mentioning here Sona?s theatrical and musical talents. From early childhood Sona took part in the family plays and concerts, which were organized by her mother.  Later on she began to stage family plays and concerts herself, together with her sisters, in addition to being the costume designer, scenario writer, and producer. Through this process all the girls began to display their abilities to sing and act. From 1999 until 2002, Sona studied at Ashot Bznuni?s Jazz Vocal School and took part in several vocal competitions.  Along with her work in the field of the visual arts Sona has been a member of an acappella trio ?The YY Sisters?, where she has been singing with two of her younger sisters since 2000. In 2001 she was awarded first place in the Amateur Music Clip Competition sponsored by Rubikon, one of the most popular TV music shows in Armenia. During the same period Sona attended the ?Hakob Kojoyan? Art Educational Complex in Yerevan, Armenia.  In November 2002 she directed and premiered a big show based on her own novel, which was about the relationships between people and nature, artist?s world and the real world.  The show was staged at the N.P.A.K professional theatre in Yerevan.

I reached Sona and had this friendly discussion with her:

What do you prefer to call yourself; Sona the painter or Sona the Jazz vocalist?
I always knew I wanted to be an artist. I have been drawing since I remember myself. There was no time when I had doubts about what I wanted to be. Although there are many things that interest me; most of them are different forms of art such as music, theatre, fashion design even culinary arts. But visual art is my true love.

I love singing jazz. Singing to me is just another way of expressing myself, not with images but sounds. All forms of art are like different languages. One could use any of these languages to convey the same message.

Since when do you live in the US?
I moved to the US with my family 5 years ago. I received most of my formal as well as specialized visual art and musical education in Yerevan where I attended the Hakob Kojoyan specialized art high school and Ashot Bznuni's Jazz Vocal School as well as the State Academy of Fine Arts. Here in the US I am currently in my last year at the Montclair State University where I am completing a Bachelors Degree in Art Education with concentration in painting. 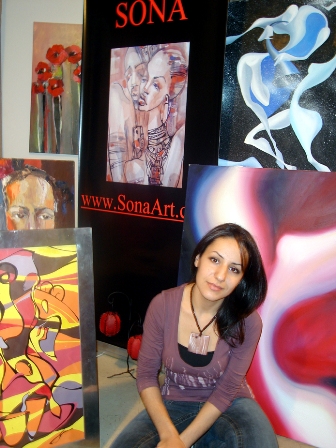 How much influenced are you from your father and his art?
I think that I am greatly influenced by my father. I spent a lot of time in his studio when I was little. It was almost like a sacred place. I felt like it was an honor to be there. I loved looking at how he worked. Everything always looked so easy and beautiful. I had my special corner where I was allowed to make art under the peaceful sounds of my father?s woodcarving tools and the sound of classical music coming from the old radio. When I was younger he didn't give me much instructions, instead it was more the artistic environment created by my parents that made me an artist. I think that a lot of the lines in my work are almost the 2 dimensional version of my fathers 3 dimensional work.

You have a beautiful Jazz painting collection, do you plan also to be a professional jazz vocalist?
I love creating paintings or drawing inspired by Jazz, but I don't think I could be a professional Jazz vocalist. I think just as one should be born an artist, the same way one should be born a singer, a performing artist. I don't see that in myself although I enjoy singing once in a while.

You have vivid and colourful paintings, they speak of themselves; which art school are you influenced by?
I feel as if I am influenced almost by all art schools. There is something to be appreciated and learned from all of them. There are some periods in art history or styles that I like more than others. For example; I like art nouveau, I like impressionism and some elements of surrealism. I think that the viewer can see the influence of all those styles in my work. I believe that my biggest inspiration is the nature and beautiful human beings.

Tell us about the ?YY Sisters? accapela trio? How active are you in it? And what are the group's aims?
The YY sisters accapella is very special to me because I get to spend time with my sisters when we practice and perform. The trio is also special because of what we sing. Singing the old Armenian tunes that seem to be lost in today's popular culture is a wonderful way to feel the warmness, the intensity, the soulfulness of the Armenian spirit. We are currently recording a CD and are planning to continue performing for the Armenian community as well as beyond it nationwide.

When does Sona sing and when does Sona paint? Is it related to your mood at that moment or is it just a need?
I always paint in my mind. Even if I don't do it physically. Some interesting ideas come to my head, then I start imagining how I would paint them, what colors would I use. How it would look like and sometimes even imagine the people's emotional reactions to them. The same is with singing. I sing in my head a lot, at home, when painting. Usually I physically engage myself in art making and enter my sacred world of art when I am sad or disappointed. Sorrow seems to inspire me a lot. I sing when I am extremely happy or just when I am calm and relaxed.

Where did you exhibit your work and where do you feel more appreciated?
I exhibited some of my work in Minsk, Belarus. I feel appreciated everywhere; wherever there are people. Art is such a universal thing that it really doesn't matter where you are. There are people who could appreciate and find themselves in my art regardless of their cultural background. That is what makes art so special. It is the visual language that speaks and nothing else.

What are your dreams? What do you wish to achieve?
I have so many dreams. One of my dreams is to travel to many different countries and to learn and get inspiration from their art. I also dream about my own art gallery and art school that would have a great jazz CD collection, a lot of delicious Armenian coffee and a garden with beautiful flowers. My 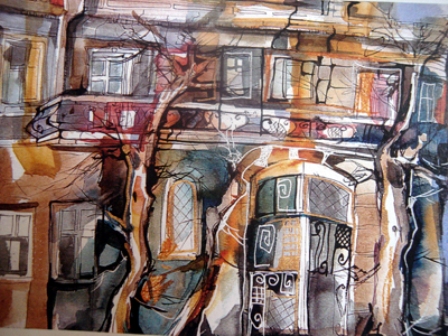 biggest dream is to have my own art school in Armenia where the most gifted children can have free education.

What do I want to achieve? I want to never stop growing as an artist. I want to keep being never completely satisfied with my own work, because that would mean the end of my growth. I want my art to become even more universal yet not lose its face and the Armenian flavor. Most importantly I want to be a good human being that would leave a beautiful trace behind her.

I would like to wish Sona all the best also thank her and her husband Tigran Mikaelyan, who at the same time helps her manage the business and communication side of her art.

For those interested in Sona?s art, please log on her webpage  or just drop her an e-mail.