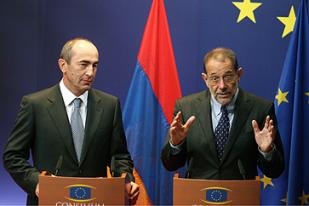 Robert Kocharian, Armenia's president, has welcomed a vote by a US House of Representatives' committee supporting the description of mass killings of Armenians by Ottoman Turks after 1915 as genocide.
?
He said: “We hope this process will lead to a full recognition by the United States of America of the fact of the Armenian genociders.”
?
Kocharian made the remarks after talks with Javier Solana, the EU foreign policy chief, in Brussels on Thursday.
?
He urged Turkey to join Armenia in talks to restore bilateral relations, but said Ankara had no right to bully other nations into refraining from recognising the killings as genocide.
?
'Position of denial'
Kocharian said: “All of our foreign contacts around the world demonstrate that there is no disagreement or that there is no doubt anywhere in the world about the events that took place in Turkey in 1915, and there is a consensus regarding those events.
?
“Turkey has warned of damage to bilateral ties and military co-operation if congress passes the measure”
?
He said the passing of a resolution by the US Congress would have no impact on diplomatic ties between his country and its neighbour, Turkey, which are currently nonexistent, but said he was open to talks with Turkey.
?
Further, Kocharian said: “We are ready for diplomatic relations without any preconditions and we are ready to start a very wide dialogue with our Turkish partners on all possible issues of Armenian-Turkish relations.”
?
Solana urged Armenia and Turkey to “look to the future and work to build bilateral ties”.
?
Turkish reprisals
The US House of Representatives' foreign affairs committee vote came despite objections from George Bush, the US president, and Turkey, a Nato ally that has provided support to Washington in Iraq.
?
Turkey condemned the committee's action and cautioned against any move to take it to a full House vote.
?
It said such a development would? jeopardise a strategic partnership with an ally and friend and would be an “irresponsible attitude”.
?
There have been demonstrations in Turkey against the vote and Barnaby Phillips, Al Jazeera's correspondent in Istanbul, said: “Nationalist anger is mounting.”
?
Gates' warning
Robert Gates, the US defence secretary, gave warning on reprisals from Turkey following the vote.
?
He said Turkey was crucial to US supply lines into Iraq, with 70 per cent of US air cargo, 30 per cent of fuel shipments to US forces, and 95 per cent of new mine-resistant armoured protected vehicles going through Turkey.
?
He said: “The Turks have been quite clear about some of the measures they would have to take if this resolution passes.
?
“It's worth noting that the French parliament passed a similar resolution, and there were a number of steps taken by the Turkish? government to punish, if you will, the French.”
?
The massacres of Armenians marks one of the darkest periods in Turkey's recent history.
?
'Insulting Turkishness'
In a separate development, a Turkish court has convicted the son and a colleague of Hrant Dink, the Turkish-Armenian journalist who was murdered in January.
?
Aram Dink and Serkis Seropyan were found guilty of insulting the Turkish identity for an article published last year and each given one-year suspended sentences
?
The European Union is urging Turkey to scrap article 301 of the penal code, which forbids “insulting Turkishness”, saying it restricts freedom of speech.
?
Erdal Dogan, the journalists' lawyer, said the men would appeal to a higher court.
?
The case against Hrant Dink, for calling the killings of Armenians during World War I a genocide, was dropped after his death, but the court continued with the prosecution of the other men.
?
Dink had already been convicted of the charges and was appealing his case when he was shot dead in Istanbul.
?
Source: “Al Jazeera” (English edition), 11 October 2007
http://english.aljazeera.net/NR/exeres/AEA7C3FD-4866-4A7A-9892-F9FC0C0BAF48.htm
?
Photo: President Kocharian and Mr. Solana. Kocharian said Ankara should not bully countries into not recognising the killings as genocide [AFP]

?
Cartoon by Lucine Kasbarian: Truth Consequences (ex-American Ambassador to Armenia lost his job because he believed in the reality of the Genocide).
?
Click on the cartoon to get a bigger view.?
? 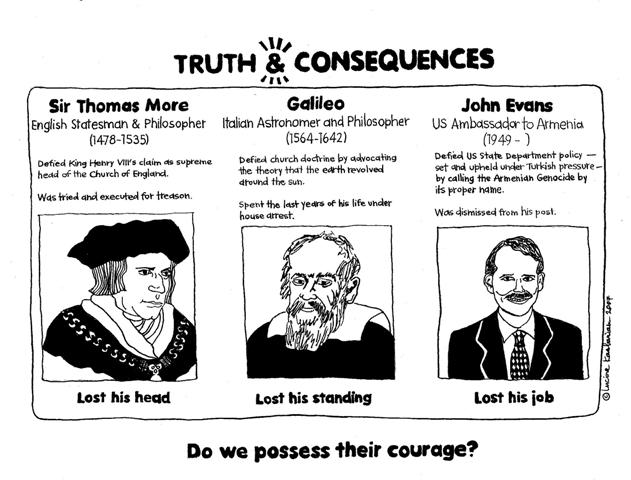 Newer PostFuneral for Iraqi Armenians killed in security shooting
Older PostSona Yeghiazaryan: My biggest dream is to have my own art school