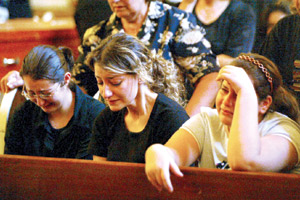 Weeping mourners called for justice Wednesday at a funeral for two Armenian Christian women killed while driving in Baghdad ? the second shooting of civilians involving a security firm linked to U.S. government-financed work in Iraq in less than a month.

The funeral Mass for Marou Awanis and Geneva Jalal, who died in Tuesday's shooting, was held at the Virgin Mary Church. Awanis' three daughters cried and other female relatives wailed over the caskets, adorned only with a golden cross.

Iraqi authorities blamed the deaths on guards working for Unity Resources Group, a security company owned by Australian partners but with headquarters in the United Arab Emirates.

Unity, which provides protection for USAID contractor RTI International, said an investigation was under way, but initial findings showed its security team fired after a car failed to stop despite “an escalation of warnings which included hand signals and a signal flare.”

Statements from both Unity and RTI have made clear the guards were not escorting RTI clients when the shooting occurred.

Witnesses and police said it appeared that Awanis, who was driving, was trying to stop when the shooting began.

The Rev. Kivork Arshlian urged the government to punish those responsible despite the immunity that has generally been enjoyed by foreign security contractors in Iraq.

“This is a crime against humanity in general and against Iraqis in particular. Many other people were killed in a similar way,” he said. “We call upon the government to put an end to these killings.”

He demanded that those responsible be held accountable in Iraq. 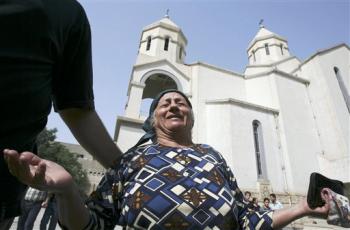 “This security company should leave the country. Those who committed this crime should be punished because they claimed the lives of two people,” he said. “We do not want a trial in Australia, which we would know nothing about.”

His comments reflected the growing anger against the private security companies ? nearly all based in the United States, Britain and other Western countries ? as symbols of the lawlessness in Iraq since the U.S.-led ouster of Saddam Hussein in 2003.

“What is the use of the word 'sorry?'” screamed Nora Jalal, Awanis' daughter and a student at Baghdad's Technology University.

Government spokesman Ali al-Dabbagh said the shooting was “part of a series of reckless actions by some security companies.”

The deaths of the two women ? including one who used the white car as a taxi to raise money for her family ? came a day after the Iraqi government gave U.S. officials a report demanding hefty payments and the ouster from Iraq of embattled Moyock, N.C.-based Blackwater USA for a shooting last month that left at least 17 civilians dead.

The Blackwater guards implicated in the Sept. 16 shooting also were protecting American specialists working under USAID contracts on development projects in Iraq, highlighting the difficult balance facing Western agencies trying to help rebuild Iraq while keeping their own staff safe.

Tuesday's killings were certain to sharpen government demands to curb the expanding array of security firms in Iraq watching over diplomats, aid groups and others.

Unity provides security services to RTI International, a group based in Research Triangle Park, N.C., that promotes governance projects in Iraq for the U.S. Agency for International Development.

Both Unity and RTI acknowledged a security contract between them but said RTI staffers were not present at the shooting in Baghdad's Karradah district. 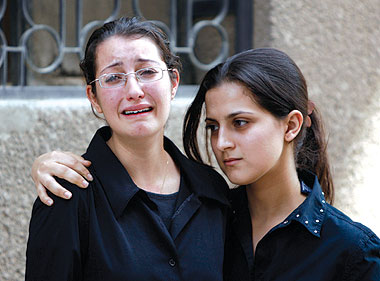 A U.S. Embassy spokeswoman said RTI was under contract by USAID but was responsible for its own security. “USAID does not direct the security arrangements of contractors,” Mirembe Nantongo said.

According to the USAID Web site, RTI has about $450 million in U.S. government contracts to work on governance projects in Iraq. USAID is a semiautonomous arm of the State Department that manages U.S. aid programs.

Michael Priddin, chief operating officer of Unity, told The Associated Press the firm was working with Iraqi authorities “to find out the results of the shooting incident. … We are trying to work out a true picture of what happened.”

In a statement Tuesday night, Priddin said, “We deeply regret this incident.”

Iraqi government officials, police and witnesses said guards working for Unity fired on a white Oldsmobile as it approached their convoy, killing the two women before speeding away. The incident occurred near a Unity facility in Karradah.

Four armored SUVs ? three white and one gray ? were about 100 yards from a main intersection in the Shiite-controlled district, according to Iraqi accounts. As the car moved into the crossroads, the Unity guards threw a smoke bomb in an apparent bid to warn the driver not to come closer, said policeman Riyadh Majid, who saw the shooting.

Two of the Unity guards then opened fire. The driver tried to stop, but was killed along with her passenger. Two of three people in the back seat were wounded.

Police said they collected 19 spent 5.56 mm shell casings, ammunition commonly used by U.S. and NATO forces and most Western security organizations. The pavement was stained with blood and covered with shattered glass.

Majid said the convoy raced away after the shooting. Iraqi police collected the bodies and towed the car.

A second policeman, who spoke on condition of anonymity because he feared retribution, said the guards were masked and wore khaki uniforms. He said one left the vehicle and started to shoot at the car, while another opened fire from the open back door of an SUV.

Awanis' sister-in-law, Anahet Bougous, said the woman had been using her car to drive government employees to work to raise money for her three daughters after her husband died during heart surgery last year. 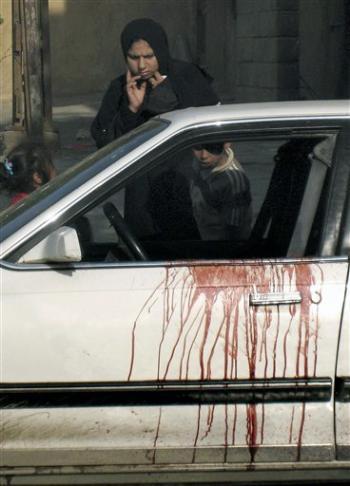 2-A sibling of Marou Awanis, one of two Christian women killed Tuesday in Baghdad by members of a private security firm, mourns during a funeral service outside the Armenian Orthodox Virgin Mary Church, Baghdad, Iraq, Wednesday, Oct. 10, 2007. (AP Photo/Hadi Mizban)

4- A woman and a child inspect a car with blood splattered on the door after two Christian Iraqi women were shot to death in central Karradah, Baghdad, Iraq, on Tuesday, Oct. 9, 2007. Iraqi police, and witnesses said that the men who shot them were in a convoy of four SUVs commonly used by private security companies. While there was no indication Blackwater USA was involved, the attack threatened to increase calls for limits on the security firms that mounted after the Sept. 16 shooting deaths of as many as 17 Iraqi civilians allegedly that company's guards. (AP Photo)