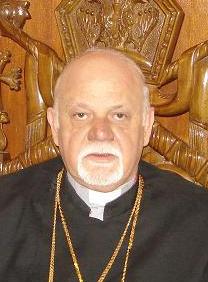 His Eminence Archbishop Avak Asadourian, the Primate of the Diocese of the Armenian Church of Iraq and the General Secretary of the Council of Christian Church-Leaders in Baghdad, headed a delegation that visited the Christian Council of Sweden.

A mass was celebrated in the Lutheran Cathedral in Uppsala. After the mass the Church of Sweden had the opening of its synod at the auditorium of the University of Uppsala in the presence of Their Majesties the King and Queen of Sweden.

At the opening ceremony of the Synod His Eminence Archbishop Avak Asadourian delivered a greeting message which was received with a standing ovation.

His Eminence explained the complicated and dangerous conditions under which all Iraqis including Armenians are living since April 2003.

During Divine Liturgy celebrated by Fr. Nerseh Khalatian. His Eminence delivered the sermon on the spiritual meaning of the feast of the Holy Cross of Varak.

On his return to Baghdad, Archbishop Avak visited in Amman, Jordan Archbishop Vahan Topalian, the Primate of the Armenian Church of Jordan,