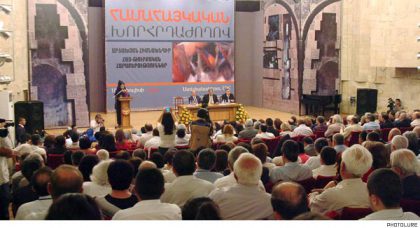 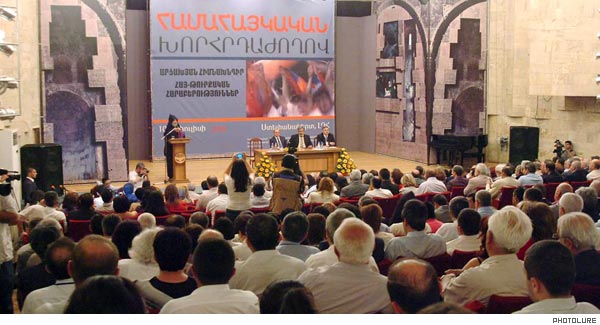 STEPANAKERT? A two-day Pan-Armenian conference in Stepanakert, organized by the Armenian Revolutionary Federation, concluded on Saturday (11 July 2009) with a firm resolution demanding Yerevan make immediate and drastic corrections to its flawed approach to both the Nagorno-Karabakh peace talks and the ongoing negotiations to normalize relations with Turkey.

The resolution, as it related to the Karabakh Conflict, called on the Armenian government to refrain from signing any framework agreement through international mediators that would compromise the security and independence of Karabakh. The resolution also demanded the immediate return of Stepanakert as a full-fledged party to the negotiation process. In regards to Armenia?s rapprochement with Turkey, the resolution demanded that Armenia immediately break off from the negotiations.

The summit, held under the patronage of Nagorno-Karabakh Republic President Bako Sahakian, was to address snowballing concerns in Armenian society over the precarious course of Armenian-Turkish relations and the Nagorno-Karabakh negotiations. It was attended by 120 delegates representing political, academic, public and business circles in Karabakh, Armenia and its worldwide Diaspora.

The appeal came a day after the presidents of the United States, Russia and France issued a joint statement at the G-8 Summit in Italy urging the presidents of Armenia and Azerbaijan to quickly ?resolve the few differences remaining between them? in order to finalize an agreement on a comprehensive settlement to the Karabakh conflict. The Armenian and Azeri presidents are to meet in Moscow on 17 July 2009 under the auspices of the OSCE Minsk Group, where they will be asked to endorse an updated version of the Madrid Principles, first issued to Armenia and Azerbaijan in November 2007.

The conference also occurred amid a regional tour by the US, French and Russian co-chairs of the Minsk Group, in which they visited Yerevan and Baku to prepare for the upcoming talks.

The basic principles of the Madrid Document, published for the first time in this joint statement, require ?the return of the territories surrounding Nagorno-Karabakh to Azerbaijani control and an interim status for Nagorno-Karabakh providing guarantees for security and self-government.? The Madrid Principles also envision a corridor linking Armenia to Nagorno-Karabakh,? as well as a future determination of the final legal status of Nagorno-Karabakh ?through a legally binding expression of will,? and the right of ?internally displaced persons and refugees to return to their former places of residence.?

Azeri president Ilham Aliyev alleged in an interview on Russian State Television on July 4 that consensus had been reached among the parties to begin the withdrawal from the liberated territories and that that Karabakh would not have a corridor linking it with Armenia. He added that these principles had been agreed upon without any discussion on the status of Nagorno-Karabakh. Official Yerevan has yet to refute this statement.

Armenian Foreign Minister Eduard Nalbandian has only denied that the updated Madrid Principles are final. Speaking to reporters at a joint news conference in Yerevan Monday with visiting US Deputy Secretary of State James Steinberg, Nalbandian assured that ?some of the details? presented in the joint statement were still ?being negotiated,? while others ?have not been discussed? yet. Steinberg,  dispatched to Armenia immediately after the joint statement was released, was to arrive in Baku Tuesday.

The resolution issued at the close of last weekend?s conference called on Sarkisian not to sign the updated document. ?The conference believes that adopting any international document without direct participation of the key party to the conflict, i.e. the authorities of the Nagorno-Karabakh Republic, is condemnable, inadmissible, and devoid of any legal power,? the resolution said, adding that the OSCE Minsk Group?s calls for an expedited settlement of the conflict based on the Madrid Principles ?is not in line with the nature of the conflict and its history,? and ?bypasses and ignores the already legitimately expressed will of the Nagorno-Karabakh people.?

The resolution also noted that ?any weakening of the security belt around the Nagorno-Karabakh Republic without restoring its territorial integrity will increase the likelihood of war and thus threaten the safety of Artsakh?s population.?

The Nagorno-Karabakh Republic declared its independence from the Soviet Union in 1991 ahead of the establishment of an independent Azerbaijan and reaffirmed that independence in a statewide Constitutional referendum in 2006. The declaration of independence was met with a declaration of war by Azerbaijan, which attempted to invade and annex the historically Armenian region.

Karabakh President Sahakian, who spoke at the conference, also underscored the need to have Karabakh reintegrated into the peace process, adding that it would be ?impossible to realize any solution without the consent of the people of the Nagorno-Karabakh Republic.?

In his speech, Sahakian also condemned ongoing efforts by Turkey to link the resolution of the Nagorno-Karabakh conflict to its rapprochement with Armenia. The Karabakh President stressed that no agreement between Armenia and Turkey should be reached at the expense of concessions on Karabakh.

Armenia and Turkey have been involved in an almost year-long effort, backed by the United States, to normalize their relations. The negotiations, which began on the principle of open borders with no preconditions, have now stalled as Ankara has conditioned the establishment of diplomatic ties with Yerevan and the opening of its closed border to major concessions by Armenia to Azerbaijan in the Karabakh conflict.

The Stepanakert conference underscored President Sahakian?s concerns on the matter and urged Yerevan to re-evaluate its failed rapprochement with Turkey before it?s too late.

?Turkey continues to establish preconditions, consistently increases her biased role in the Artsakh issue; and in reality, instead of heading for the normalization of relations, Turkey successfully misguides the international community by thus removing the Armenian issue from the agenda,? the conference resolution said.

In this context, the resolution reiterated earlier warnings by the ARF that Turkey was exploiting the negotiations process to wrench concessions from Armenia and prevent the passage of US resolutions reaffirming the Armenian Genocide.

The resolution particularly focused on a joint resolution issued by the Armenian and Turkish foreign Ministers on April 22?the eve of the 94th anniversary of the Armenian Genocide?announcing a ?roadmap? for normalizing relations. Turkey, which had threatened to derail talks with Armenia if US President Barack Obama recognized the Armenian Genocide, had made no secret of its attempts to use the negotiations process with Armenia to dissuade the American leader from recognizing the crime.

?The authorities of the Republic of Armenia should not allow Turkey to use the imitation of negotiations for scoring additional political and advocacy points in the international arena,? the resolution said.

?Signing the joint statement of April 22, 2009, was a wrong and a short-sighted move,? the resolution added, noting new dangers that have surfaced as ?the power centers of the world? try to impose an accelerated solution to Karabakh conflict by ?steering the course of Armenia-Turkey relations in the direction which is beneficial for Turkey alone.?

The document noted that ?Armenia and Turkey, as neighbor states, will eventually have to establish normal relations,? but the resolution stresses that those relations can be established only after Turkey lifts the blockade, recognizes the Armenian Genocide, and restores the rights of the Armenian people.

But these conditions, which are part of Armenia?s national security doctrine, have ?de facto ceased to be a guiding principle of Armenia?s foreign policy,? the resolution said, adding that ?any attempt to turn the fact of the Genocide into a matter of a historical debate? is as inadmissible as ?normalizing Armenia-Turkey relations at the expense of Armenia?s sovereignty and viability and the rights of future generations.?

Considering those developments, the resolution said the authorities in Yerevan have ?a duty to revisit and reconsider the course of public interaction initiated one year ago and its negative outcomes, and should reveal to the international community Turkey?s true intentions and discontinue the negotiations.?

Hrant Markarian, the chairman of the ARF Bureau, had stressed those points in his remarks on the opening day of the conference Friday. ?It would be na?ve to think that it is possible to make a concession in any national issue without jeopardizing the whole [national cause],? Markarian said, adding that he saw a very real danger with ?heavy consequences? to follow as a result of the ?wrong course? being taken in Armenia-Turkey relations and the ongoing Karabakh settlement process.

Armenia?s former foreign minister, Vartan Oskanian, also touched on those points during his own remarks. Discussing the complex diplomatic realities that have emerged since the April 22 statement, Oskanian said attempts by Turkey to drive a wedge between the Armenian nation have made it all the more difficult to overcome the challenges facing the two Armenian states. The challenges, he continued will demand national unity ?along the lines of a proactive forward-looking campaign.?

In addressing these issues, the resolution also demanded ?confidence, realism and political will from the incumbent and future authorities of the Republic of Armenia and the Republic of Nagorno Karabakh.? The resolution also said that both governments must be ?guided solely and exclusively by the interests of the Armenian nation and the sense of responsibility before generations to come? in these two ?critical issues.?

Oskanian stressed that the time had come to mobilize the nation?s resources behind a clearly articulated set of national demands that corresponds to the ?current reality and takes into account Artsakh?s seventeen years of independence.?

In passing the resolution, the delegates?who came from 25 countries?reiterated their determination ?to protect the interests and the rights of the [Armenian] nation and the state and to secure [its] independent and dignified place in the family of civilized nations, using all possible and impossible means.?

Underscoring the document?s analysis and recommendations for both issues is a reiteration of the potential for the Republic of Armenia, Artsakh, and the Diaspora to ?become an organized power.? The document states this is possible if all three entities act ?as parts of the whole? and establish a format for exercising joint will to employ their capacities and prove to their ?neighbors and centers of power of the world that the Armenian nation shall not tolerate infringement of [its] legitimate rights.?