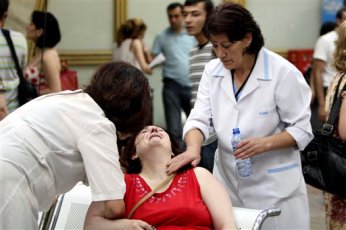 A Russian-made Iranian airplane carrying 168 people crashed into a field on 15 July 2009, killing everyone aboard. Flaming wreckage, body parts and personal items were strewn over a 500 meter area.

The Caspian Airline's jet had taken off from Tehran and was headed to Yerevan. It crashed at 11:30 am today (15 July 2009) about 16 minutes after takeoff, near the city of Qazvin, northwest of Tehran.

It was the latest in a string of deadly crashes in recent years that have highlighted Iran's difficulties in maintaining its aging fleet of planes. U.S. sanctions prevent Iran from updating its old aircrafts. The country has come to rely on Russian aircraft, many of them Soviet-era planes.

The plane was carrying 153 passengers and 15 crewmembers, deputy chairman of Armenia's civil aviation authority Arsen Pogosian said. “In all likelihood, all on board were killed.” It created a hole measuring 10 to 30 meters wide and 7 meters down as it hit the ground. The plane was broken into very small pieces.

Most of the passengers were Iranians, many of them from Iran's large ethnic Armenian community, as well as 11 members of Iran's national youth judo team. About forty Armenians were among the victims, including five citizens of Armenia.

At Yerevan's Zvartnots airport, Tina Karapetian, 45, sobbed and said she had been waiting for her sister and the sister's 6- and 11-year-old sons, who were due on the flight.

Relief workers scoured farmlands seeking human remains amid the debris of the crashed airliner, while shocked relatives looked on, hoping that at least the remains of their loved ones might be found.

Grey-haired Arlen Stepanian was crying as he waited for relief workers to find something to help identify his two dead daughters who were aboard the plane. One daughter, Shogher, had told him minutes before take off that the plane was facing a problem.

“They were going with their friends on holiday. I had not seen them for a week. Shogher talked to me from the plane and said the flight was delayed as there seemed to be a problem with the plane,” Stepanian told Agence France Press.

“Their mother is at home. She is in a total shock,” he said, waiting near the massive crater from which smoke was still rising hours after the disaster.

Many relatives poured out their anger at Caspian Airlines, saying its planes could not be trusted.

“I hate these planes. With so much travel between Iran and Armenia, there have to be better planes,” said Alex, 24, an Iranian of Armenian origin who lost around dozen friends and relatives in the crash, including children.

Another man who was mourning the death of his sister-in-law too claimed the airline used faulty planes.

“I travel a lot to Armenia, but I never fly on a plane. I don't trust them,” said the man, whose sister-in-law perished while on her way to meet her daughter studying in an Armenian university.

As he spoke, several local villagers were seen carrying away broken parts of the plane, while some took pictures of each other holding the debris.

Special headquarters have been opened at the airports of Yerevan and Tehran. Doctors at Zvartnots Airport are rendering assistance to the victims' relatives. Names of the victims were fixed on the walls. A Hot Line was opened at the Ministrry of Foreign Affairs in Armenia. To get information, one can call +37410562543, +37410566811 or +37410544041 (extension 202 or 217).

President Serzh Sargsyan cut short his visit to Shirak Marz and returned to Yerevan to follow the details of the Tehran-Yerevan plane crash. He has declared Thursday, 16 July 2009.

Photo:
A woman related to a victim of crashed Iranian passenger plane is helped at Zvartnots airport in Yerevan (AP Photo/Photolure, Tigran Tadevosyan).

Combined sources. Below video is from Radio Free Europe.

Photo on the video: A young woman checking the list of victims in Zvartnots airport (Photolur, Haig Badalian).