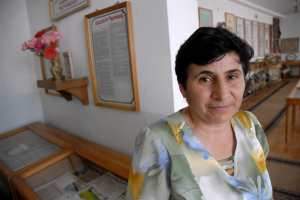 NOR KHARBERD, ARMENIA // Safaryan Yepraksya is a mine of information about the province of Kharberd in what used to be Western Armenia.

The 55-year-old schoolteacher tells how there were 300 Armenian villages, each having up to 500 houses, plus dozens of Armenian churches and schools in the province, the capital of which was a city also known as Kharberd.

These figures are also displayed on the wall of the tiny museum she has created in a school in Nor Kharberd or new Kharberd, a district in the south of the Armenian capital, Yerevan, named after what Armenians consider a lost province.

Ms Yepraksya said there were 280,000 people, half of them Armenians, in old Kharberd, as it is sometimes referred to, at the time of the ?genocide? [see Azad-Hye comment below] in which Armenians were driven from the area.

?The majority of those born in Kharberd ended up in France, Lebanon and other countries,? she said. ?Nor Kharberd was founded [in 1929] when they came to live here.?

The province, now in Turkey, where it is called Elazig, has seen brisk economic and population growth in recent years and is home to around 600,000 Turks, Azeris and Kurds.

Ms Yepraksya, a 55-year-old history teacher, spent nearly 10 years gathering material for the museum before it opened in 1983. She said she has always been interested in the history of Western Armenia, the term she uses for what is now eastern Turkey.

As well as being used for classes at Nor Kharberd secondary school number two, Ms Yepraksya said the museum also attracts diasporan Armenians from countries such as Lebanon, France, Russia and Greece. Some, she said, are the children and grandchildren of former Kharberd residents.

According to the museum, 68 churches, 83 schools and 12 monasteries were destroyed during the ?genocide?.

Turkey does not recognise the events as genocide and disputes the Armenian assertion that 1.5 million of its people were killed, saying the actual figure was one fifth of this.

The museum has black-and-white photographs of the residents of the original Kharberd and recent colour pictures of their descendants, some of whom live in the United States and other western countries.

There are souvenirs, ranging from pieces of white lace to vases and jugs, collected from residents of Kharberd who fled the killings and deportations of the early 20th century.

A simple painting of a man and woman wearing traditional Kharberd clothing sits on the wall.

?This is the notebook of a female college student from 1911,? Ms Yepraksya said while reaching into a glass cabinet and picking out a book that contained writings and a few dried flowers.

?These all came from old Kharberd. She survived the genocide and the notebook was brought to us.?

Displays commemorate some of Kharberd?s most celebrated residents, including the writer Tlkatintsi, who was killed near the city in 1915. The school?s partner institution, secondary school number one, is named after him.

Some of the first families to settle Nor Kharberd are also pictured. Some of their descendants, among them the great-grandchildren of Kharberd residents, attend the school.

?If you don?t inform your younger generation about historical facts, they will gradually be forgotten,? Ms Yepraksya said.

?That?s why we need to collect all these and teach the younger generation so they can remember the Armenian cause.?

Ms Yepraksya said students were taught about the ?genocide? when they were aged 10 and 11, although even when they begin at the school aged six they have some knowledge of Armenian history. ?At pre-school they?re told we had greater Armenia, we had Mount Ararat [a mountain in modern-day Turkey that Armenians consider their spiritual home], of how it was ours and it?s not ours now,? she said.

According to Hrachik Melkunyan, the headmaster of the school, which has 770 children aged between six and 17, while the museum ?develops patriotism? it does not encourage hatred of Turkey.

?It?s not about developing hostility,? he said. ?We just tell them the facts: who we were, where we came from as the Armenian nation.

?We know that one day the historical truth, everybody will know about it and we know we?re showing it in a just way.?

What Mr Melkunyan would like most is to take groups of students to visit old Kharberd and in future this might be possible.

Turkey and Armenia have held talks about establishing diplomatic relations and reopening the border that Turkey closed in the early 1990s over Armenia?s support for the breakaway region of Nagorno-Karabakh, previously controlled by neighbouring Azerbaijan.

?With great pleasure we?ll take our students to old Kharberd,? Mr Melkunyan said. ?We want these two nations not to be enemies and to collaborate together, if that?s possible.?

Reporter Daniel Bardsley has done a remarkable work by highlighting the legacy and the story behind new Kharberd (or Kharpert in Eastern Armenian language or Harput in English sources). However he has insisted to use the word “genocide” in brackets, indicating (maybe under editorial pressure) that he disputes the historical fact of the Armenian Genocide.

On 22 June 2009, “The National” posted the following comments made by two readers on the same subject: (Link)

It is astonishing to see the word genocide used in quotation marks, The Armenian city lives in a school museum (June 20), when the word was coined by the jurist Raphael Lemkin specifically to describe the barbarity that befell the Armenians at the hands of the Turkish state. Dr Lemkin, a lawyer of Polish-Jewish descent and Holocaust survivor, used the word genocide in 1943 to describe the deaths of the Armenians, and then the Holocaust. Before the word existed, the British prime minister Winston Churchill and world leaders described the events as the ?Armenian holocaust?.

In 1985, the United Nations recognised the Armenian genocide in an official report.  In 2003, the International Centre for Transitional Justice found that the events of 1915 included ?all of the elements of the crime of genocide as defined in the 1948 UN Convention on the Prevention and Punishment of the Crime of Genocide?.

While the article by Daniel Bardsley was informative, it seemed ironic that he would use the word genocide in quotation marks three consecutive times.

I wonder if it was Mr Bardsley?s choice to use the quotation marks, or whether it was his editor who decided to put the word in quotation marks. In case his editor doesn?t know, the word genocide was coined, in part, to refer to the Armenian massacres of 1915.